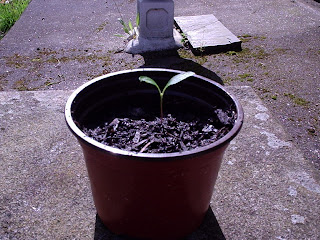 This is the plant I'm hoping will one day provide lots of extremely spicy chillies for the delight of my tastebuds. I planted the seeds a month ago but only one germinated. It's a Himalayan variety that promises to be truly mindblowing. Whether this little shoot survives much longer and develops into a proper chilli bush is a very uncertain question. Unlike Adele, who is already harvesting tasty salad vegetables on her allotment and is cultivating a vast array of herbs, beans, peas and root crops, I've never been very successful at growing things, and in fact I have the opposite of the proverbial "green fingers" (I hestitate to claim ownership of "red toes" in case it exhibits a lack of understanding of the concept 'opposite').

Growing plants is probably nothing like writing stories. That analogy is almost certainly dodgy. When it comes to writing I'm on firmer and more fertile ground... I'm currently (and perhaps somewhat foolishly) working on a dozen projects simultaneously, writing short stories for several anthologies (including Exotic Gothic III and Strange Tales III) and for three new collections I'm slowly putting together: (a) Salty Kiss Island, (b) Ditto & Likewise, and (c) Implausible Planets. That's surely too many collections. Having said that, I have just pitched another to a publisher who seems enthusiastic, a selection of my more 'serious' gothicky work from the past 15 years or so, slanted heavily towards ghost stories. In fact I might plug it as my 'Ghost Story Book' even though it contains some pieces that don't feature those wispy rascals. But it's the ambience that counts.
# posted by Rhys Hughes @ 11:21 AM 0 Comments 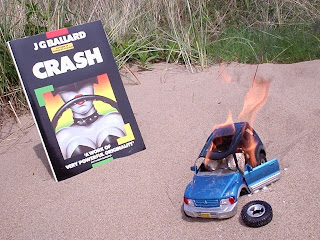 Hot on the freshly cold heels of the genius writer Philip José Farmer comes news that yet another titan of the literary world has just departed this world forever... J.G. Ballard, of course, certainly one of the finest authors of the late 20th and early 21st Centuries. Ballard was brilliant, no doubt about that: he possessed one of the clearest prose styles of any writer, a style not just clear but unexpectedly ecstatic in a glacial sort of way. Some of his short stories are among the best ever written. His collection Vermilion Sands in particular is one of the highest achievements of the form. In fact one of the tales from that volume, 'The Cloud-Sculptors of Coral D', is probably my favourite short story ever...

As for his novels, they are overwhelmingly intense. I still haven't read his famous trilogy of early disaster novels, The Drowned World, The Drought and The Crystal World, but last year I did finally get round to tackling his cult book, The Atrocity Exhibition, an experimental novel that reads more like a collection of very strange and bewildering (though certainly powerful and affecting) linked stories -- except that the stories aren't really linked in a normal sense: they are more like amplified feedback, psychotic recursions of each other, overloaded with specific obsessions that not only echo the obsessions of the reader but sometimes impose them retroactively... After reading The Atrocity Exhibition I started dreaming about 'rectilinear geometries' in an all too familiar way, even though I'd never given them much thought before!

Ballard's core beliefs should be extremely nihilistic but he never regarded them in that way. I find his concept of the 'death of affect' very disturbing, also his assertion that science has become the ultimate pornography, and that pornography is always a powerful catalyst for social change. Ballard claimed to be an 'early warning system' for the breakdown of normality and for those imperceptible moments when the present becomes the future, but he heralded those dislocations with too much glee to justify the 'warning' part of his own label: he was more of a salesman for the warped psychology of the future... And yet nothing will ever erode the staggering importance, the extreme malignity and the utter originality of his novel Crash! and its relevance to the world we live in. The featured photograph is my tribute to that masterpiece. The cost of the picture was £2.05 (£1 for the toy car, 85p for the firelighters stuffed inside the chassis and 20p for the box of matches to ignite the wreck). The wreck itself was created by bashing the car with a pebble found on the beach.

Here's some music to accompany the photo...

Maybe I promised there would be no more pictures of monsters, but I'm making an exception now to celebrate the news that I've already sold Twisthorn Bellow to the publisher I submitted it to... I started writing my novel at the end of January, finished it seven weeks later and sold it one month after that, making this one of my fastest and smoothest projects. If only all of them could go that way! And the publisher wants to bring it out this year, perhaps as early as September. How nice not to wait many years for a completed manuscript to see print! 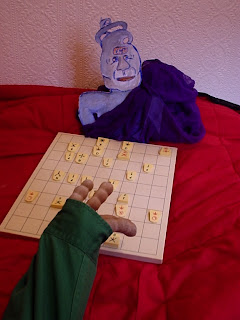 The photo I have chosen to signify the occasion shows the blue golem himself in the middle of a game of shogi against the Sweet Tamarind Hand. Shogi is the golem's favourite board game, though he also enjoys xiangqi, hnefatafl, chaturanga, mancala and Cluedo. In this particular game the Sweet Tamarind Hand is winning but there seems to be some cheating going on. Why grow flesh fingers when you can grow strange sticky fruit ones instead? That's the outlook of the Sweet Tamarind Hand.

Tamarinds also symbolise the fact I've just completed a sequel to 'The Furious Walnuts', a tale I wrote back in 1995. I had no plans whatsoever to create a sequel, it was purely spontaneous. The sequel is called 'The Smutty Tamarinds' and has been submitted to a forthcoming Futurist anthology... I have lately been busy writing several stories for several new anthologies. Various unpublished stories are appearing online too: for example, this ezine has an unusual structure, namely two contrasting pieces from each featured writer, one realistic, one fantastical. So it features one of my rare realistic pieces ('In the Sink') as well as something more typically whimsical ('The Juice of Days'). I'm pleased with both tales and consider them to accurately represent the two extremes of my 'vision'. 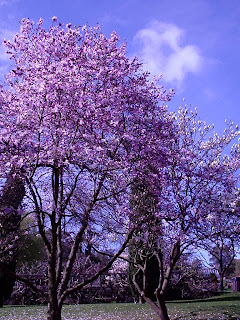 The trees are in blossom. Those arboreal rascals don't give us much time to appreciate the colours and delicacy before the blossom all falls down. Blossom evokes a minor urge to write haiku, supposedly. Authentic haiku must have a seasonal reference. This rule invalidates the first (and only) haiku I ever wrote, twenty years ago. I've never really understood the appeal of haiku. Maybe I should write a haiku about my lack of understanding. Maybe not. I stopped writing poetry of any kind a few years ago. I do have enough poems for a solitary collection, and I've actually put one together that bears the title The Knight of Whatever, but I don't imagine it's likely to get published. There is absolutely no market whatsoever for poetry. Somewhat perversely, this stark fact comes as a relief... 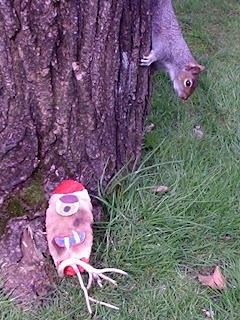 The monsters I recently created to promote my Twisthorn Bellow novel have now been disposed of. I took a certain small amount of pleasure in doing so. Snagtooth Toasta lasted the longest. Here we see him in an outdoor setting. His enormous size can be accurately gauged by comparing him to the inverted kangaroo that also appears in the picture. More photos of Snagtooth's pointless adventures among the trees can be found on my Flickr page. I'm toying with the idea of making one more monster, probably the giant radioactive Belgian ant known as Billy Them. It could be argued that I need to get out more. But I went out to take these photos... 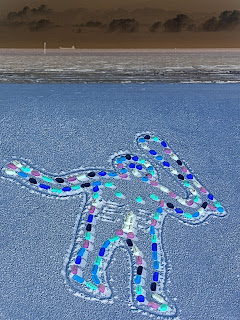 This photo is a flipped and adjusted negative of the image that will hopefully be soon gracing the cover of my Mister Gum novel. I've fiddled with the picture because the original isn't mine but belongs to the talented photographer and designer, H.F. Lawson, and I don't wish to infringe copyright. I rarely infringe anything. I don't even like infringing my forehead, preferring to sweep my hair back. The original photo is far more eyecatching and funky than this and will make an effective cover. It's thematic too, surprisingly.

Mister Gum, as I've probably said before, is a satire consisting of four interconnected sections. The first section is a satire on the teaching of creative writing; the second is a satire on crime fiction; the third, a satire on detective fiction; and the fourth is a satire on satire. Publication date is sometime in June. Subjects and situations covered by the book to a greater or lesser degree include semantics, cybernetics, identity theft, subterranean penetration, solar radiation, progressive rock, literary awards and egotism, all treated in a smutty manner.