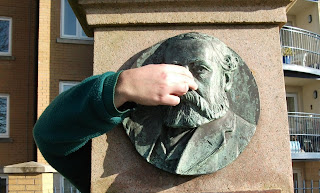 The correct focal point for the path of a planet is a star, but the writing world often seems to be in orbit around a burning pile of rubbish. I have recently been bewildered by some online activity concerning the great Russian writer Mikhail Bulgakov (Михаил Булгаков). As I'm sure most people with an interest in modern culture are aware, Bulgakov was the courageous, clever and exceptionally inventive author of many superb novels, including The Master and Margarita, rightly considered one of the greatest classics of 20th Century Literature.

There's a publishing house in Romania by the name of Ex Occidente and they do a nice line in very fine books. One of their latest projects is a tribute volume to Bulgakov. This news seems to have upset some people for some bizarre reason. Comments have been made that imply (or overtly state) that Bulgakov was some sort of right-wing Tsarist, or a Fascist, or even just a plain anti-Semite! The motivating ignorance behind such defamation is boggling to the heart as well as the mind. One wishes that people would read more history books.
Bulgakov lived in a time of profound violent change. The Russian Civil War wasn't the neat black and white (or Red and White) conflict it is frequently portrayed as being. Not all Reds were Bolsheviks and not all Whites were Tsarist. The complex fact is that not even all anti-Reds were White, and not all Whites were White! I'm sure that the general modern attitude that the struggle against the Bolsheviks was purely Tsarist would come as astounding news to the Mensheviks, the Bundists, the Liquidators, to say nothing of Nestor Makhno and Anwar Pasho...
Unlike most writers in the modern societies of the West, Bulgakov had to fight to stay alive, fight with great vigour both physically and spiritually. Bulgakov stood up to Stalin during the period of Stalin's greatest power (an act of courage equalled by Ernst Jünger's stand against Hitler when the Nazi Party was in its prime). To denigrate a man of such honour reflects badly on those who cast the insults. One wonders why they do so. Might they have an ulterior motive? Might their ignorance be deliberately engineered? 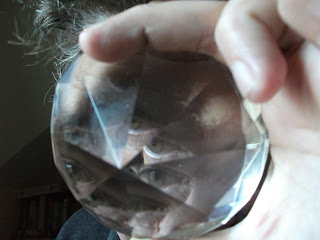 I never talk about my own politics or religion on this blog, but as other writers seem happy to do so, I guess there's no reason why I shouldn't. My own politics are very simple. I'm a Libertarian. So I'm anti-communist, anti-Nazi, anti-Fascist, profoundly against any politics that seeks to create a controlling state. While I do think that Ayn Rand was completely mad, I'll always prefer her ideas to those of Marx or Rosenberg. As for religion: I have been a Buddhist since I was 14 years old.

But if there's one overriding principle in my life, it's the old-fashioned concept of "honour". In a certain corner of the writing world I see a dearth of honour. Dan Teodor Ghetu of Ex Occidente is a publisher of de luxe books devoted to the supernatural tale. He has a few competitors in this field. Most of them, like Ray Russell of Tartarus Press, are happy to live with Dan as a neighbour. They don't feeel threatened in any way by Dan. But there is one press, just one, that does appear to feel threatened...
Could it be that the owners of this other press are foolishly attempting to sabotage Dan's project because they naively believe it makes good business sense to do so? Are there unsubtle hints of a put-up job here? Can the handprints of a dirty tricks campaign be detected on the margins of the special interest publishing industry? Do these 'handprints' resemble the paws of a rat? The idiotic logic seems to run: Bulgakov was a Fascist (he wasn't), therefore the publisher of his tribute volume must be a Fascist (he isn't).
It's the same logic that will be forced to condemn Dan as a Communist once he publishes his planned tribute volume to Dino Buzzati (probably my favourite of all the writers he has lined up in his tribute series). I have a proposal: all people who rant about Dan Ghetu are henceforth to be known as 'Ghetu Blasters'. And we all know what happens to those, don't we? They end up in Dan T's Inferno.
I think I smell a rat -- a great big Roden(t). But it's not big and it's certainly not great.
# posted by Rhys Hughes @ 10:22 AM 0 Comments

I've promised to send various materials (chiefly chapbooks) to various people, but I haven't fulfilled this task yet; and that's because The Fanny Fables isn't quite ready, but it should be out fairly soon, and then I'll send everything to everybody. So my apologies for the delay!

Twisthorn Bellow has just gone to the printers. I'm excited!

The novella I started writing recently looks as if it's going to turn into a full-length novel. I'm already more than 20,000 words through it, but so many more things are scheduled to happen in the plot that I doubt I'll wrap them up in less than 60,000.

As some writers do actually post extracts of works-in-progress on their blogs, I see no reason why I shouldn't do the same. This is a selection of a few pages taken from a random point in my novel(la) so far, put into triple columns to save room: 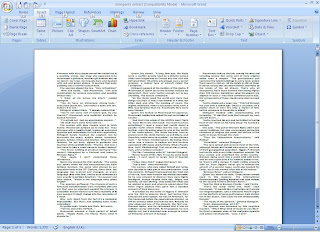 I'm having great fun writing this story, and it's flowing -- as smoothly as mercury down a polytetrafluoroethylene slope! The Abnormalities of Stringent Strange is the title: a title that jumped into my head out of the blue a few months ago! 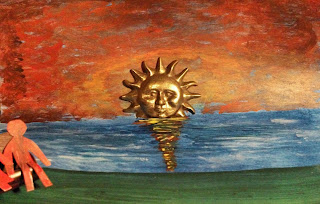 I promised to reconstruct the magnificent sunset that Adele and I witnessed on New Year's Day, so here it is! The famous "green flash" mentioned in my previous blog entry occurred at the very instant the top of the sun disappeared below the horizon, which is why it's not included. As you may note, we are seated away from the sun, but that's just so you can see us properly. In fact we faced the sunset during the entire event. I cropped this picture so that none of the zebra-striped cloth backdrop was visible (the reconstruction was balanced on a sofa) but the result is that Adele is mostly missing! As she was one of the best things about the sunset, I deem it only proper to include a smaller photo showing that missing segment. Here it is. You can see plainly how the sunlight glow has turned us orange. I strive for accuracy in everything! If you care to see the full uncropped image, then look here. 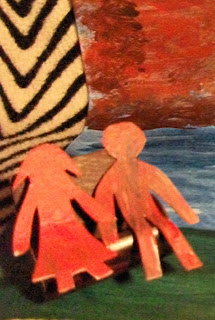 Yesterday I received a package in the post, all the way from Ex Occidente Press in Bucharest, Romania. Carefully packed inside were two books. One was Cinnabar's Gnosis, a tribute volume to the superb writer Gustav Meyrink. The other was The Night-Farers by the massively talented Mark Valentine. Both volumes are exquisitely made, books that are a pleasure to hold and behold, among the highest quality books I've ever seen from any publisher. I'm looking forward to reading them both. I'm especially pleased that Cinnabar's Gnosis contains one of my own stories, 'The Antediluvian Uncle'... Dan Ghetu of Ex Occidente Press has a cunning masterplan. He intends to create a suite (or 'masquerade') of tribute volumes devoted to the greatest of the half-forgotten European masters of weird fiction. This Meyrink homage is the first volume in his project. The second will be a book devoted to Mikhail Bulgakov. The third will be devoted to the superlative Ernst Jünger; and Dino Buzzati, Bruno Schulz and Leo Perutz are also scheduled for tribute volumes... 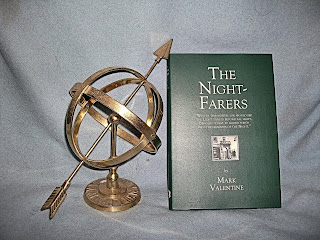 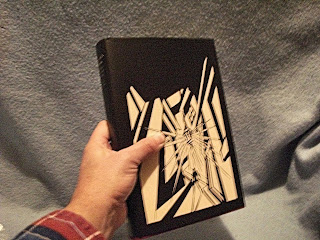 The start of another year. But does time really go round in a loop every twelve months? The path of the Earth through space isn't a circle but a much more complex shape, a shape I can't even visualise... No matter! Hangover free, we spent all of New Year's Day outdoors, rising before dawn to greet the sunrise on the beach. The night before, we had been privileged to witness a blue moon and a partial lunar eclipse, while sky lanterns passed overhead; when we reached the beach, this moon was setting and the sun came up at almost the same moment. We lit a celebratory fire with frosty driftwood, then went walking in the Gower. The sky remained cloudless and wind speed was close to zero. Fabulous! 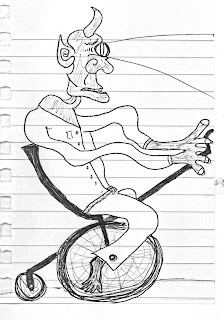 The sunset was especially good, directly into the calm sea with little atmospheric distortion. Because the view was so clear I was treated to the relatively rare phenomenon known as the green flash. For years I've wanted to witness this sight and I regard it as a good omen for 2010. Soon I intend to make a reconstruction of the event. Then I'll photograph it and post the image here. In the meantime, apropos of nothing, here's a badly drawn monster -- a bicyclops. His single eye is a headlamp!

Jules Verne wrote a novel about the green flash. I mention this because Verne is one of the influences on a novella I've just started writing. Other influences include a host of pulp writers from the early decades of the 20th century, such half-forgotten names as Henry Hasse, Capt. S.P. Meek, Charles R. Tanner, Neil R. Jones, Ray Cummings... My novella is entitled The Abnormalities of Stringent Strange and features telepathic steampunk dinosaurs, debonnair werewolves, macrobiotic vampires, clockwork robots, zombie scholars, hippie Nazis (HIPZIS) and three planets on collision course with Earth -- Bronson Alpha, Bronson Bravo, and Bronson Charlie (which makes a sound like a harmonica when it grazes our magnetosphere).