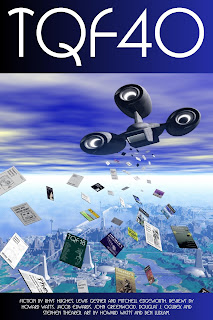 The third (and final) medley of stories featuring my character Thornton Excelsior can now be read for free, courtesy of Theaker's Quarterly Fiction #40, which has just been released into this mad bad sad glad world of ours...

TFQ #40 is available in a variety of formats, as a PDF file, for the Kindle, etc; or you can order it as a proper paperback book from Lulu (but why she has taken this responsibility upon herself defeats me; doubtless it has something to do with the locomotion). If you're interested in any of these formats, please click on this link. And enjoy! Or don't enjoy, if you prefer!

Something to Crow About 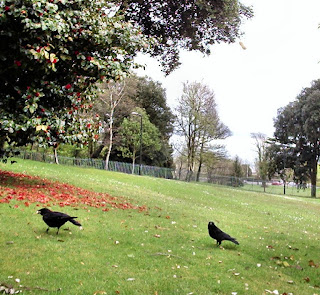 Over the past four years Adele and I have made friends with a couple of crows that live fairly near us. Crows tend to get a bad press; they aren't the villains that folklore has made them out to be. On the contrary they are extremely intelligent and funny creatures. At first they were shy, no doubt because it pays to be wary of human beings (humans have tricked crows for centuries), but now they are much more confident and will approach quite close.

We have named this pair Asoka and Astarte. I have no idea what they call themselves. They nearly always turn up when we appear, which is an indication of trust, I guess. There is a large community of beach crows not too far away and Asoka and Astarte take part in the activities of those crows too. But at the moment they seem particularly concerned with chasing rivals out of their territory, especially magpies; and yet a jay turned up yesterday and they all seemed to tolerate each other. There is a game that Asoka plays with a local squirrel which involves encouraging the squirrel to charge at him before he hops over its head.

An Idea for a New Religion


I am fond of saying that there's only one dictatorship left in Europe. Belarus. But every week I feel myself growing more and more depressed by some item in the news that is very gradually leading me to the conclusion that Britain may eventually join Belarus in a highly exclusive club of European countries where the smallest verbal criticism of authority will secure you an involuntary stay in prison. We've already seen two harmless fools get 4 years each for blowing off steam by suggesting on Facebook that the riots of last year ought to spread to their home town, a silly suggestion that was rightly ignored by everyone, leaving me to wonder exactly what crime was supposed to have been committed? And now we have an even more absurd case, namely that of John Graham Kerlen.

Mr Kerlen is a blogger who recently called a local politician a "c***" on Twitter. The local politician was one Melvyn Seymour of Bexley Council (in south east London). Mr Kerlen posted a photograph of Melvyn Seymour's house with the caption: "Which c*** lives in a house like this. Answers on a postcard to #bexleycouncil."  Melvyn Seymour saw this tweet (how? Is he a compulsive ego surfer?) and he complained to the police. And the police, bizarrely, decided to take action according to the provisions of Section 127 of the Telecommunications Act 2003. And so for this shocking crime, this truly appalling transgression, Mr John Graham Kerlen now faces SIX MONTHS IN JAIL!

I really don't know what to say... I'm flabbergasted, stupefied, speechless... But I'll try to say something. The Orwellian nightmare is coming true. It's coming true fast. It's crazy that we live in a society where a thin-skinned politician such Melvyn Seymour (and he must have incredibly low self-esteem to bother with such a trivial issue) will receive the support of the police and courts and state because of a simple online insult by a blogger. Not because of an action but because of words! And technically it wasn't even a proper insult but a question, a question that contained a single swear word!!

Ordinary people insult each other every single day of the year. That's a simple fact of life. They insult each other on the street, from the windows of passing cars, in pubs and shops and especially in queues. In previous centuries (and even in some modern countries) such insults might have led to a duel, a rather hotheaded way of settling the issue; but certainly there would be no question of getting the police, the courts or the government involved. It's none of their business. And besides, the truth of the matter is that words are harmless. If we are offended by an insult it's because we have essentially chosen to be insulted.

If this gone-to-the-dogs Britain of ours is really going to go down the road of making a simple insult a crime deserving jail, then before long every single person in this country will be behind bars! Every single office worker, builder, tradesman, commuter, merchant, academic... We all insult each other from time to time. Do we really want this? And let me tell you something: if this does turn out to be the trend, then I will start complaining to the police every single time anyone insults me. I will complain every single time I feel insulted by a Daily Mail headline attacking immigrants or people on disability benefit, every time I see anything at all that offends me in any way whatsoever. And I recommend that you do the same. If stupid games are going to be played, we, the people, can play them just as well as anyone, just as well as the worryingly egotistical (narcissistic personality disorder?) Melvyn Seymour...

The real truth about insults is that they are taken, not given. The last time I was in Morocco a group of children shouted at me in Berber, a language I don't speak. They might have been insulting me for all I knew! But did I feel offended? Not in the slightest! Why? Because I didn't convert their words into an insult in my own head. And that essentially is how an insult works, that's the mechanism: it's the person who feels insulted, not the person who casts the insult, who completes the insult, who brings it into being, who makes it a proper insult. Without the contribution of the insultee, there is no insult. In fact the insultee is more responsible for creating the insult than the insulter. So if John Graham Kerlen ends up in jail, it's logically safe to say that Melvyn Seymour ought to go to jail too, and for longer!

But our government doesn't care about logic. Nor do the courts or the police. I have devised a solution to this difficulty, to this blatant trampling of our free speech. Let's get together and form a new religion: a religion in which the abstract concept of the 'insult' is sacred! In our new religion (let's call it the Church of the Holy Crap) the insult will have the same status as a prayer in ordinary montheistic religions. And because this is a mad world, the superstition known as 'religion' has a protected status, unlike the natural rights of human beings, so we'll be free to insult anyone and anything with impunity! We'll even be free to call Councillor Melvyn Seymour of Bexley Council a c***!

Hey, am I off to jail for six months? Rule Britannia!


This morning I created my first inspirational message. You know the sort of thing that keeps cropping up on Facebook? Wise words in a box, a maxim or adage that encapsulates some advice that if followed correctly will lead to a radical improvement in our lives? Well, I wanted to invent one of those for myself. So I did. And here it is... 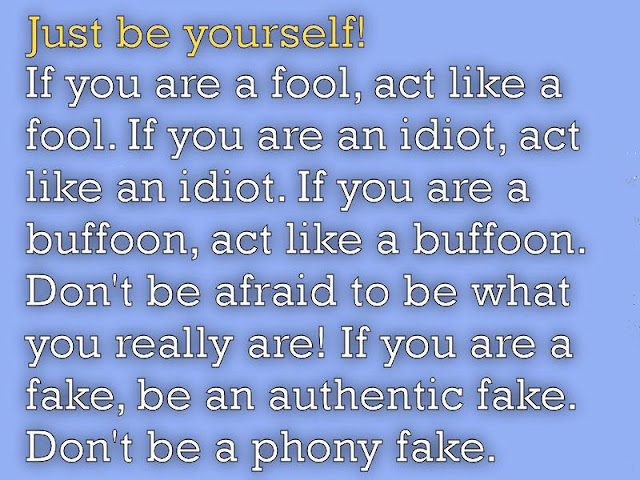 What do you think? Do I have what it takes to be a guru? Only you can decide that, Grasshopper! 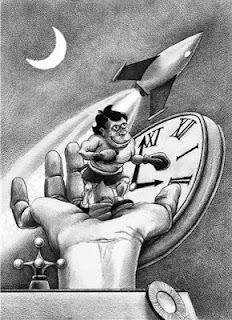 Oops! I haven't updated my blog for 10 days. How indolent of me! I did plan to write about our recent camping trip, my first of 2012, but somehow I never got round to it. Frazzled by the sun in the day; frozen and sandblasted by the wind at night beneath the amazingly bright stars; scrambling over rocks to get around a headland before the tide came in; the rescue of two brittlestars and a crab (Adele did that); the call of a chough, rarest of the corvids; the discovery of a Roman silver mine; feet as sore as an angry bear's bonce...

Instead I'm going to take the opportunity of pointing out that my novel Engelbrecht Again! is on special offer. Reduced by 40% from $50 to $30. Check out the publisher's website for more details. This was the first novel I ever wrote and has an extremely tortuous history. Completed in the summer of the year 2000, it was subsequently accepted by no less than four different publishers, all of whom defaulted for one reason or another, until Dead Letter Press heroically issued it in 2008. There's also a special offer on another Dead Letter Press volume, a massive anthology called Bound for Evil, themed around 'weird' books: take it from me, that's a hell of a tome!