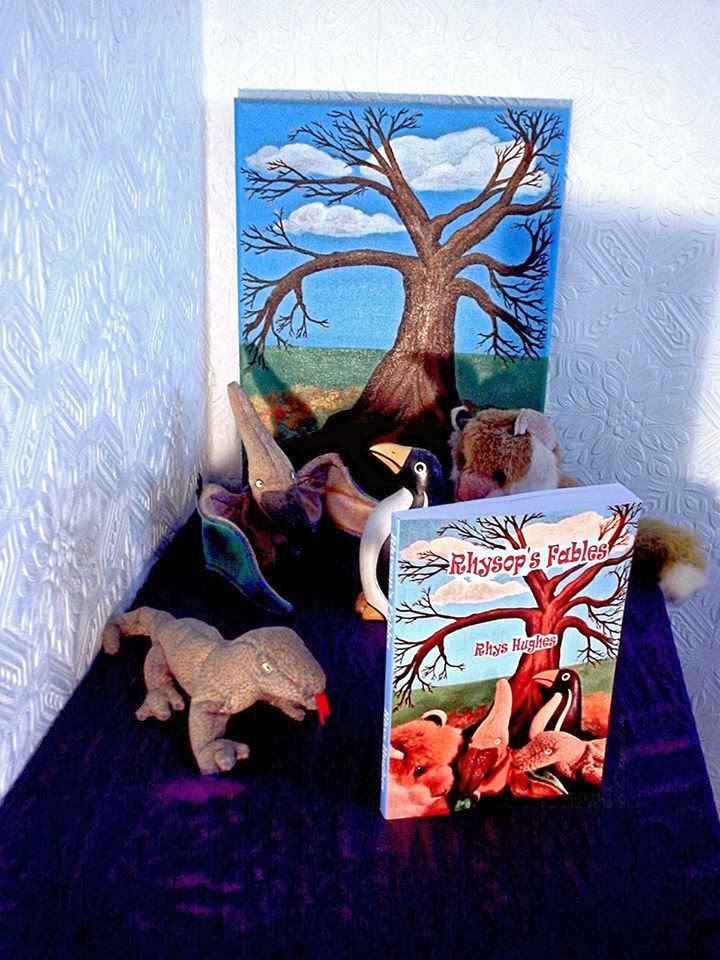 After a couple of years of just being an ebook (two separate ebooks in fact) RHYSOP'S FABLES is now a real book. I had problems getting the cover right. In the first version I spelled the title wrong... Ahem!

But anyway, it is done to my satisfaction now. I think it has come out the best of the five Gloomy Seahorse books so far. This one consists of 207 fables and also includes the parable of a homeless fable. My fables are a lot less helpful than traditionally is considered desirable in this genre...

This picture shows the book as a physical object at last with the animals and the painting that I used to design the cover.

I am currently in the process of making a short film featuring a selection of these fables and with luck that will be done in a couple of days. I am slightly hampered by the fact I know almost nothing about film making. Ah well!  In the meantime, here is one of the fables so you can get a fair idea what they are like: 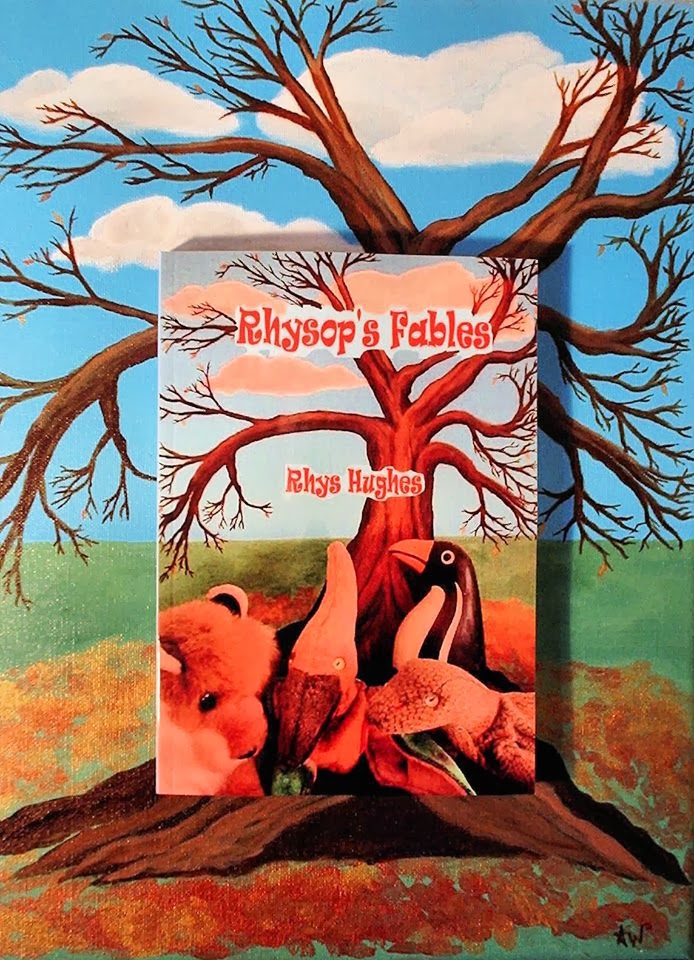 A king once ordered a messenger to deliver a sealed envelope to another king. The messenger set off on the dangerous journey and he was never tempted to open the envelope and read the message within.

After months of hard travelling, he finally reached the palace of the second king, who opened the envelope in front of him and read the letter with a frown that grew deeper and deeper. Finally he reached for a loaded blunderbuss and pointed it at the messenger’s head.

“Clearly you have received some bad news,” said the messenger, “but I’m not responsible for what has happened, so don’t shoot the messenger! I simply completed my given task.”

Silently, but with a grim expression, the king handed the letter to the messenger, who began sweating as he read it. The message said simply, “Please shoot the messenger who delivers this to you.” The king pulled the trigger of the gun and it went off.

¶ Go on, shoot the messenger! 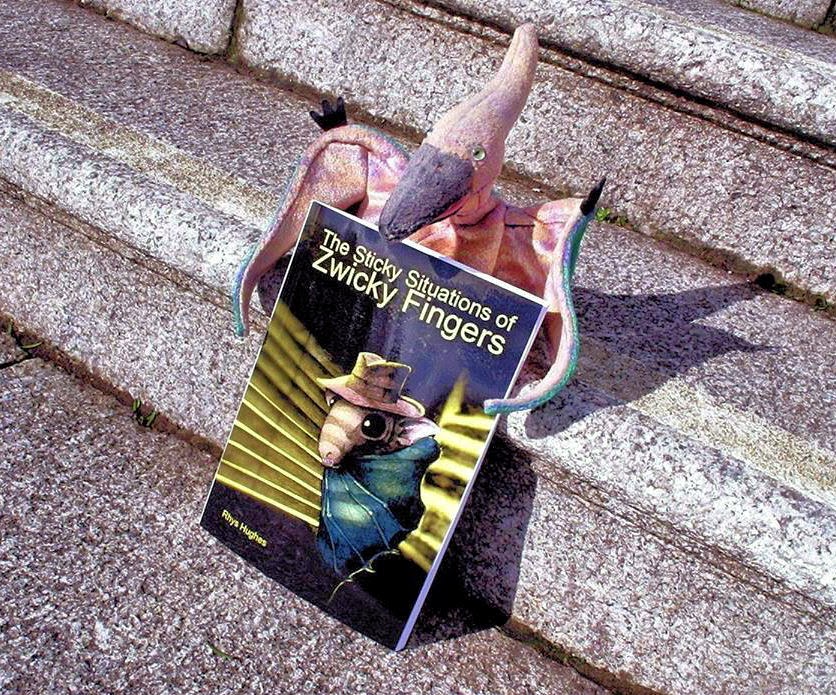 The Sticky Situations of Zwicky Fingers, which hitherto has only been an ebook, is now a real book too, made out of paper and requiring no electricity to read. Zwicky is a giant fruit bat detective who is asked by his policeman friend Procopius Dork to solve various crimes that are paradoxical or even impossible.

This is the fourth book to be published by my own Gloomy Seahorse Press. I intend to publish exactly 10 of my own books, no more, and then I will concentrate on publishing material by other writers. I have, for instance, just accepted a novel by a new writer for publication this summer.

With a cover by the marvellous artist Chris Harrendence, the ten adventures of Zwicky Fingers can be purchased from Lulu here, and soon it will be available on Amazon and other online bookstories.

Flash in the Pantheon for Real 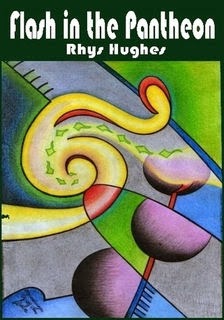 "If only I'd had Flash in the Pantheon with me when I hitchhiked through Germany in 1959! I did have Fredric Brown's Nightmares & Geezenstacks flash fictions, to which Rhys Hughes tips his hat—but half way down the Rhine I ran out of flash; and I don't mean torch battery. Many of Hughes' microstories imply much, served with wit and whimsy and word-relish, high spirits and bittersweet twists—like a candied anchovy in a shot glass of rum; and some are very punny. Hughes would have kept me going till I got to the Hofbräuhaus." -- IAN WATSON

My collection of flash fiction, which has only been an ebook until now, has finally become a real book too... And the paper book is bigger and better than the ebook was... 123 stories, none longer than 999 words and some of them only one sentence long... The cover was done by the genuinely amazing Brankica Bozinovska from Macedonia. And the awesome Ian Watson, genius wordsmith and doyen of the gedanken, gave it a nice blurb too, as you can see above, which delighted me profoundly... 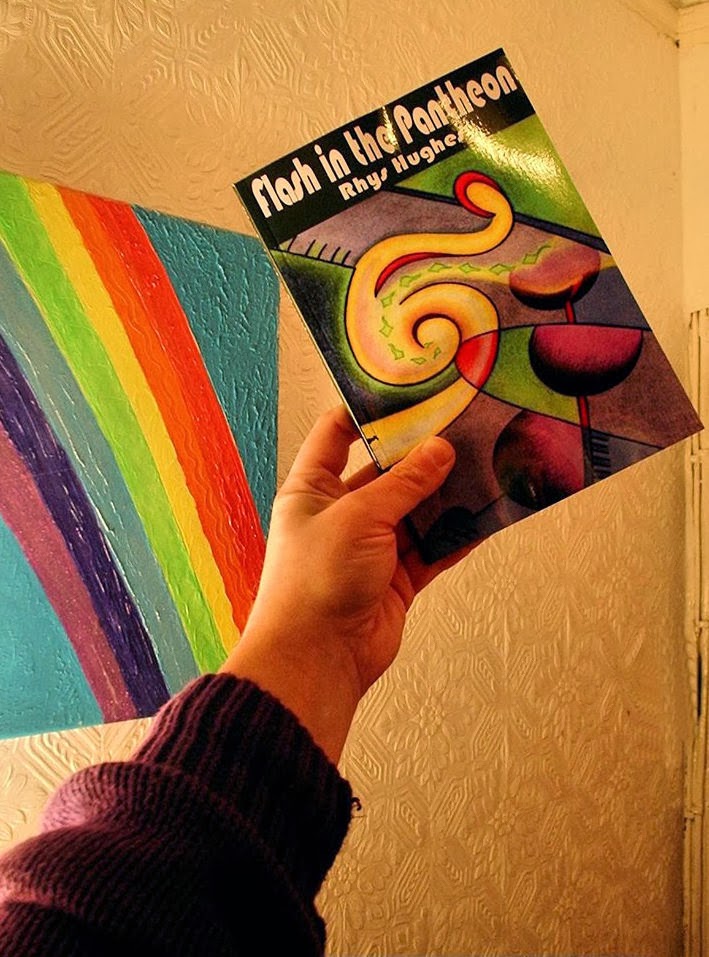 Information about the contents of the book and how they compare with the contents of the ebook can be found here. This collection took a long time to put together and there were many false starts. I kept revising the contents, finding old material that would fit, writing new work, increasing and decreasing the number of fictions in the volume. At one point it consisted of 144 tales and I subtitled the book "a gross of microfictions" but ultimately too many stories weren't quite right for the project, so I dropped them. What I finally achieved is leaner, sharper and funnier... and it's here!

The book will be available from Amazon soon, but in the meantime it can be ordered here.

The book is surprisingly beautiful and I am hugely indebted to the talented Brankica, who did this cover for me way back in 2007. Not everything is a flash in the pan: some things burn for a long time before exploding! 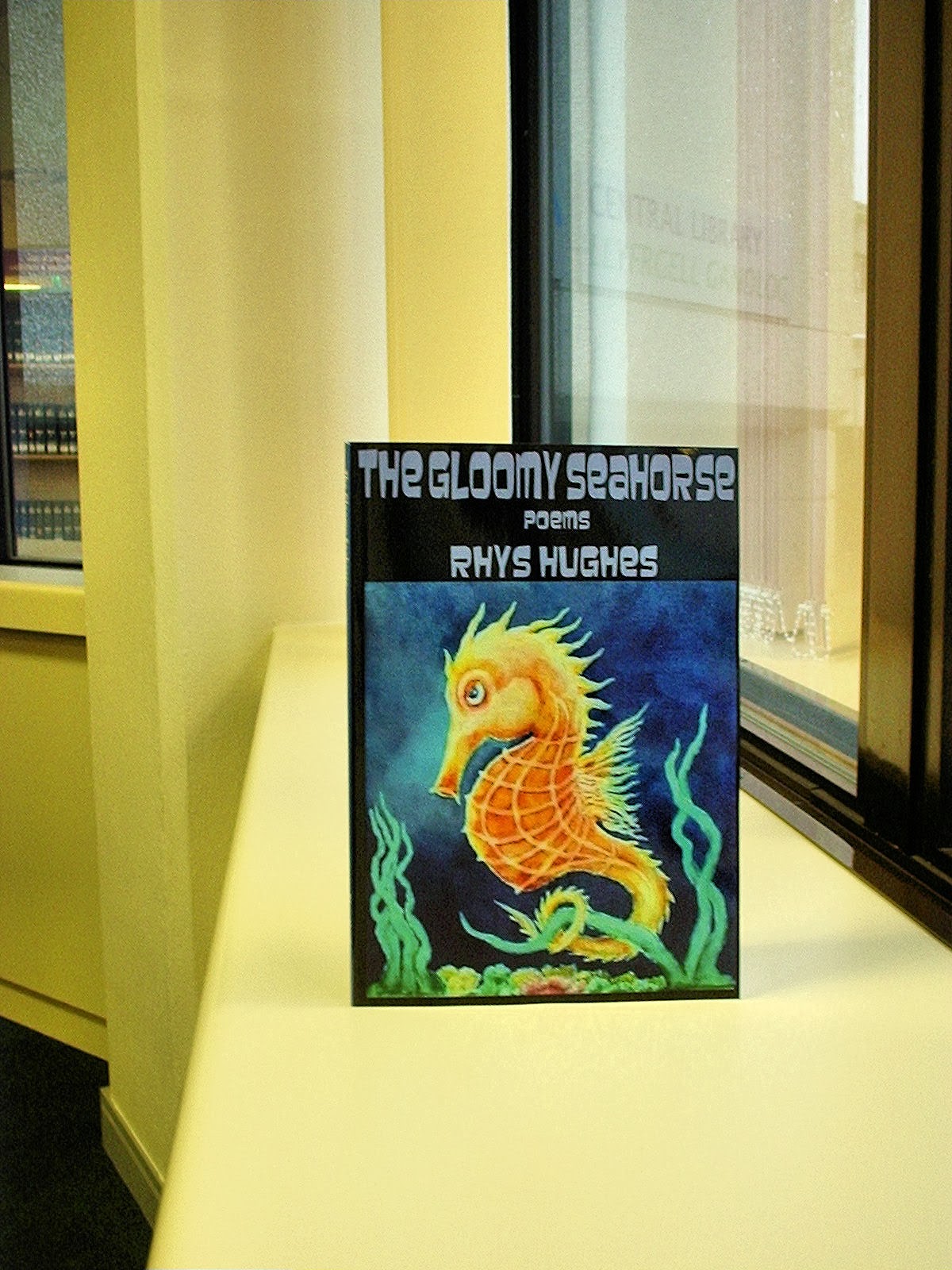 The cover of my poetry collection wasn't quite right and the contents needed to be very slightly adjusted. So I made the required changes and the revised copy with the mildly tweaked cover and contents arrived today. I am very pleased!

I will be sending out review copies next week. Watch it get reviewed abroad but not in any publications in Wales! The Welsh 'literary' establishment seem to have me on some sort of blacklist.

Anyway... that doesn't matter. The book exists and is available; and poems that have been sitting in boxes or on floppy discs or in the pages of very obscure small-press magazines for twenty years have finally been liberated and now are gathered together in one place. Yay!

Click on this link for more information or for the chance to purchase the book.


Steady! / My first poetry book ever / is now ready / and that's the truth / Forsooth! 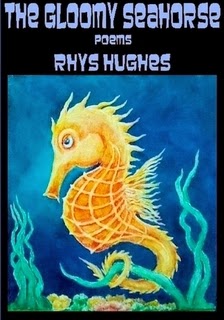 Well, here it is... I have been thinking about this for ages and finally decided to do it for real. I doubt I will ever have another poetry book published. I don't write enough poetry to fill up a second volume. Back in the 1990s I wrote a reasonable amount of poems and occasionally recited them in public too; then I had a brief resurgence in 2005/2006 and won the First Poetry Slam to be held in the Dylan Thomas Centre in Swansea. But since then I haven't written much at all.

Anyway... some of these poems were published in obscure 'journals' a couple of decades ago. Most weren't. They aren't like normal poems, though, so do be warned!

The book is priced at £3.99 but post and packing is £2, which is a bit cheeky. Make sure you select the 'standard delivery' option and not the more expensive one with tracking. If you click on this link and choose the 'preview' button under the cover you can read the first five poems for free... Just so you can see what to expect if you buy it...

My one and only poetry book ever, including poems that have been lying idle for twenty years... Rejoice you ten or eleven people who are likely to buy it!