The Long Chin of the Law 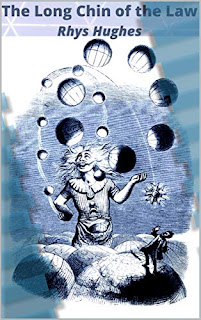 I am delighted to announce that this futuristic crime/farce novella is now available as an ebook. It features nine linked stories.
The first of the nine was the very first story that I was completely happy with, and I wrote it on December 27th 1991, which is more than twenty-seven years ago.
It was also the first story I wrote that seemed to demand a sequel, and so it began the long process of me tying every fiction I write into every other.
Titian Grundy is the Prefect of Police on the Isle of Chrome. He travels everywhere on a motorised unicycle and lives in a society where everything takes turns being illegal. Even the solving of crime becomes illegal at one point, but not solving it remains illegal too, which puts him in a tricky situation.
Originally published as the third part of my book Nowhere Near Milkwood, this novella is now finally presented as a complete work in its own right, which is the way I originally envisioned it.
# posted by Rhys Hughes @ 8:43 PM 0 Comments 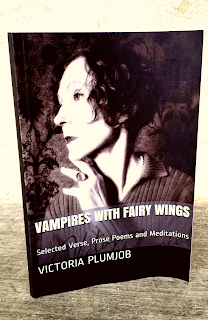 The book I recently edited has just arrived in the mail for me. Some people have been wondering if 'Victoria Plumjob' is an invented character and whether Vampires with Fairy Wings is some kind of spoof. I suppose they think this because I have been known to do spoofs in the past. But I assure you that Victoria was real and that this slim volume contains the best of her surviving work. It wasn't easy putting it together! Her work is scattered in the most obscure locations. One rolled up poem was found plugging the neck of a bottle of Retsina in a forgotten Greek wine cellar. Another poem was rescued by an owl from a burning canoe. A third was intercepted floating over the ocean on currents of air because some origami expert had folded it into a miniature albatross.
The great literary critic Harold Bloom had this to say about Victoria: "I believe she was wholly the equal of her contemporaries, Ern Malley and Hernia Whittlebot." High praise indeed from such a luminary! Another great critic, Bernardo Puffin, has compared her favourably to Prissy Jimjams; while Jaggery Feeley has asserted that, "Her work puffs and pants like a Puffin without pants." If Victoria never existed, such remarkable academic figures would never say such good things about her! It is true that she has always been very obscure and this is partly due to the fact that she often employed eccentric layouts for her poems which publishers found difficult to replicate. As a result they tended not to bother.
# posted by Rhys Hughes @ 3:50 PM 0 Comments 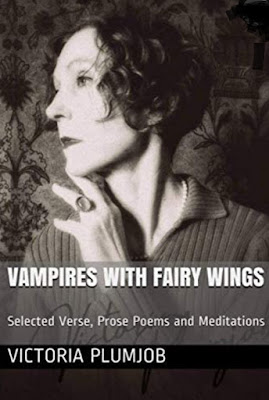 Last year I was asked to edit a selection of the surviving verse and prose poems of unjustly forgotten 1930s writer Victoria Plumjob. She was friends with André Breton, Salvador Dali, Chump Rumple, Edith Shriek and Roger Dammit Upstairs, and she was one of the leading lights of the Furious Ducks, an obscure avant-garde collective. Most of her work was lost in a series of bizarre accidents but enough remains to fill a slim volume (one of her poems was rescued by an owl from a burning canoe).
Preparing the scattered manuscripts of Victoria Plumjob (1917-1960) for republication after so many decades has been an insightful experience. She was a precocious child and began writing stories when she was very young. Her earliest publications were in ephemeral student magazines, few of which have successfully endured the ravages of time. The only collection of her work published in her lifetime was issued in a limited edition by Catwheel Press and is now extremely rare.
Vampires with Fairy Wings is thus the first volume to feature her work for more than eighty years. It includes an excellent afterword by noted grammatical scholar Jaggery Feeley, and thanks to the efforts of historical researcher Nina Vangerow it also features photographs of Victoria published here for the very first time.
"This book strikes a valedictory note that is neither sharp nor flat but deserves to be struck anyway." -- Bernardo Puffin.
Available from Amazon in both paperback and ebook editions.
# posted by Rhys Hughes @ 9:04 PM 0 Comments 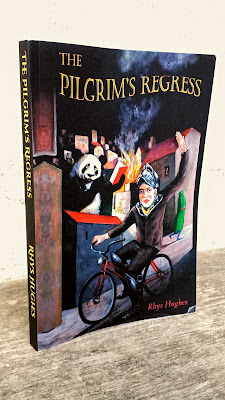 The novel I wrote when I lived in Spain twelve years ago is now both a paperback and an ebook. The Pilgrim's Regress was mostly written in Madrid but also on a farm in the mountains near Segovia.

I have talked elsewhere about how it began as a single short story that spawned a few sequels. It was only after I had written five linked stories that I realised I was actually writing a novel and that the stories were chapters in a longer work.

The Pilgrim's Regress is a sort of 'Don Quixotic' picaresque adventure, although it's not strictly speaking a set of unrelated episodes as there is an overall arc. The novel is one of my favourites among all my books but I know it is far too metafictional to be commercially successful. No matter! I had huge enjoyment writing it.

There is something about the Spanish landscape that lends itself very well to picaresque wanderings; but in fact the hero of this novel travels to Africa and India as well as across Persia.

The book is available on all Amazon outlets including Amazon UK.