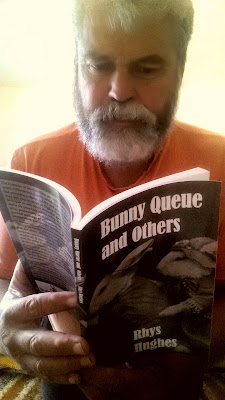 The back of the book reads as follows: "The bunnies of imagination are seeking entry to your mind. Offbeat but timely, whimsical but wise, playful but perceptive, these quirky and mostly short poems may put you in mind of Ogden Nash, Ivor Cutler, Spike Milligan or any other absurdist poet you like, and put a smile on your face while doing so. It is sensible to be silly, profoundly so in some instances. That is the general message of this collection. The bunnies of imagination are already queuing. Will you let them in?"

It has blurbs from Samuel Delany, Bruce Boston and Maithreyi Karnoor (my favourite poet) and I am waiting for the first reviews to roll in (assuming there are any!)

I was on radio recently to talk about the book and that programme can be found here on Siren Radio.

I am a regular poetry contributor to Borderless Journal and three of the poems in Bunny Queue can be found online in the May 2021 issue (I have had poems and articles in every issue of Borderless for more than one year now).

The book itself is available at Amazon and other online bookshops and maybe in some bricks and mortar bookshops too. 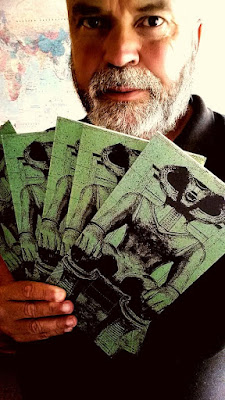 I have had a new chapbook published by Mount Abraxas Press in Romania. BELPERRON REBORN is a sequence of four fictions linked by the themes of reincarnation and identity. It's a proper old-fashioned chapbook that folds out concertina-style. I invented the character of Belperron almost twenty years ago and he has appeared in several stories since.
As my grand cycle of 1000 linked short stories finally nears completion it has become time to start wrapping up some of the mini cycles within it. The 'Belperron' stories form one of these epicycles. Most of the epicycles overlap with other epicycles. Any schematic of the big story cycle is going to be very complicated and the lines of connection may perhaps be inextricably tangled. One day I will have to sit down and map out all the epicycles, which means consigning the thousand stories into groups, but many of the stories fit into more than one group. I am sure I will eventually find a way through the problem.
This is what happens when a big project is allowed to grow organically rather than be planned with the precision of an engineer from the very beginning. But I have no regrets as to the way I have proceeded. Every story ideally has to work on its own no matter what epicycle it does or doesn't belong to. That is the most important thing. Anyway, the chapbook is now published, but obtaining copies might not be easy, as it is a strictly limited edition. I have exactly one spare one, if anyone wants to buy it.
# posted by Rhys Hughes @ 6:54 PM 0 Comments