Back in 2006, not long after my 40th birthday, I completed a novelette entitled 'Rommel Cobra's Swimming Carnival' that was intended for the pirate anthology Fast Ships, Black Sails edited by Jeff VanderMeer. This novelette introduced my Postmodern Mariner character and I was extremely pleased with myself when it was done; indeed I still regard it as one of my best stories. However it failed to get into the anthology. So I wrote another pirate story, 'Castor on Troubled Waters', that did get into the anthology and also seeded an entire sequence of similar linked stories. The end result was that I was able to put together an entire book called The Postmodern Mariner; and that's just one example of how a rejection can actually lead to a better final result. 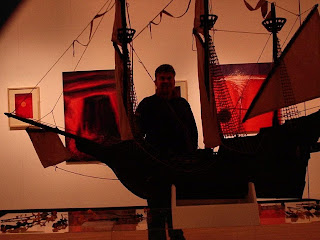 Anyway... one of the conceits in 'Rommel Cobra's Swimming Carnival' (full marks, by the way, to anyone who spots that the title is a displaced allusion to Monty Python's Flying Circus) is that the Postmodern Mariner is a blogger. His blog motto is typically postmodern: "Do you feel lucky, albatross? Well, do ya, punk?" and he specialises in reporting on sea-based absurdist mysteries. In the novelette, he has adventures in the semi-mythical over-sweetened Sea of Tea where he meets eight pirate captains who have made that brew their temporary slurping ground. To demonstrate his professionalism in dire circumstances he calmly interviews each pirate, but the interviews aren't included in the story itself. It is merely stated that they can be found on the Postmodern Mariner's blog, the address of which is given as follows: http://postmodernmariner.blogspot.com

It was therefore my task to write those interviews and post them online, to make the postmodernist jest complete, to render the full conceit viable. But I was less than efficient in completing this task! The first interview was posted on October 24, 2006, but the second didn't appear until August 18, 2008. Whoops! True, the third appeared only a couple of weeks later; but the fourth wasn't written and posted until March of this year. Clearly something had to be done. I got my ass into gear; my mule also. Finally all eight were done. It only took three and a half years. Ahem!

Here are links to the eight interviews:

At last it's done! Anyone who hasn't read The Postmodern Mariner will probably still understand the interviews, most of them at any rate! The timing of this is quite good, as the oft delayed official launch of that book should be happening in June (I know I have announced dates for this launch many times and it keeps getting postponed; but I'm more confident this time that it'll happen). Personally I regard The Postmodern Mariner and my forthcoming Tallest Stories as my funniest books; the former has a further advantage in that it's relatively cheap; and yet it has been the poorest selling of all my books so far. I don't understand why! Allow me therefore to plug it yet again, a mere two years after its unofficial launch and two months before its official launch!

Comments:
Nice blog you got here... Just droppin' by to say hi! http://www.arts-and-entertainment.info

I'll consider stockings. Tights are of far less interest to me, I'm afraid!