Odyssey 2010 was my first convention as a punter. I mean that I wasn't a Guest of Honour and I wasn't invited to take part in any panels. I was just a simple grunt with a new novel to promote, and I had to pay out of my own threadbare pocket for the privilege of attending.

The last convention I took part in was an event at the University of Glamorgan where I earned good money for delivering a lecture on OuLiPo. The convention I attended before that was themed around 'Travel in Literature' and took place in Matosinhos in Portugal; I was one of several guests and everything was paid for, flights, five star accommodation, food, drink, taxis, etc. And, of course, before Matosinhos there was Hispacon in Seville in 2007, where I was also an official guest; and a few weeks before that was the magnificent British Council sponsored event in Lisbon, where I was the main draw; and before that was Porto and Monção, etc.

So how did I cope with being a 'nobody' this time? 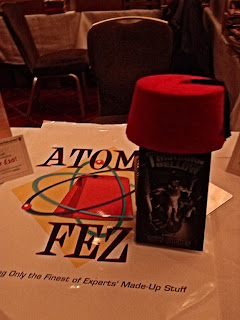 Not so well, to be honest. For a start, I'm not physically and mentally built for spending long periods indoors. Most of the conventions mentioned above were located in environments where it was possible to leave the conference hotel for a walk in the countryside or through historical cityscapes or along the coast before returning invigorated to the schedule of events. This wasn't the case with the Odyssey 2010 convention, which was held in… Heathrow! A gigantic airport on one side of the hotel, an industrial estate on the other, noosed with a tangle of motorway sliproads and tunnels just to hammer the point home. Ugly!

I therefore felt like something of a prisoner over the weekend. I might as well confess that I'm not very good in social situations. I don't mix easily with new people. It takes me a while to get to know folk and I tend to be too formal and stilted in situations such as these (it was different in Spain and Portugal, maybe because the general atmosphere is more relaxed). To recharge myself for the effort of meeting yet more new people, I need to go for walks on my own, but in Heathrow this simply wasn't possible.

I also felt at a loss with having nothing much to do. Rather bizarrely, the organisers of Odyssey 2010 were reluctant to allow me to promote my book with a proper launch; they didn't want me to give a public reading or take part in any panels. I have encountered this sort of opposition before. Possibly I've offended one of the organisers in the past; maybe I parodied or deconstructed something I shouldn't have! 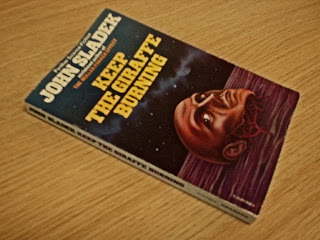 The great John Sladek had to endure this kind of treatment. He was often regarded as an arrogant troublemaker by humourless thin-skins, although in fact his main crimes were intelligence and irony. Some SF fans really don't like writing that is genuinely radical and challenging. I only bought two books over the weekend and a Sladek collection was one of them!

As it happened, I did manage to do a reading. I read a tale entitled 'The Mistake' at an event based around 'tall stories', specifically the tall stories of Arthur C. Clarke's Tales from the White Hart. As that book inspired my own forthcoming Tallest Stories volume I was determined to get involved in this event! Only by the skin of my teeth and the intervention of fate was I able to take part, and I literally fell off my chair before uttering the first word, but as it happened the reading itself went very well indeed. And yet the best thing about this entire event was meeting a remarkable fellow by the name of Andrew J. Wilson, a writer of unusual erudition and impeccable taste, who happens to have a vigorous personality and a bone-crushing handshake to boot! 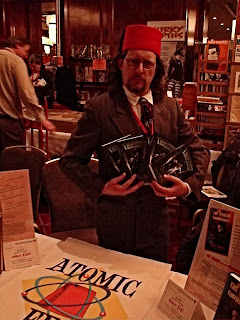 Without a formal book launch I didn't sell too many books, but I didn't really expect them to be snapped up. Twisthorn Bellow belongs to that rather rarefied and unpopulist sub-genre that Brian Aldiss calls 'Cosmic Inferno' and it's surely destined to be a slow burner (rather like the golem who is the main character!)… As for my publisher, the inestimable Ian Alexander Martin, a more likeable person would be difficult to encounter in any conference. He's funny, flamboyant and talented and he gave me a bottle of traditional Canadian 'ice wine', now drunk dry, which is quite an expensive gift. It was astoundingly fruity! 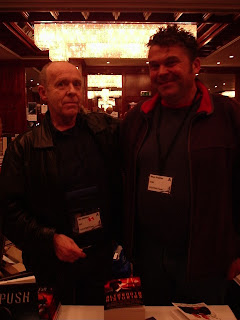 I also met several people who up until this point had only been names without faces. Neil Williamson, Ellen Datlow, Pat Cadigan, all good souls… Best of all for me was to meet Ian Watson, a writer I hold in the ultimate regard. He turned out to be very funny and friendly. I now have a signed copy of his latest book and I didn't even need to buy it. I'm happy! I turned into something of a gibbering fanboy in his presence and I barely managed to blurt out that he was a "conceptual genius". Watson's early short stories were ideas-based and very intellectual, like the stories of Sladek and Barrington Bayley. Back in the early 1990s I wrote an article that explains exactly why I rate him so highly and that can be found here.

As for the scheduled events… I attended a talk by Ben Goldacre on 'Bad Science'. Although most of what he said was absolutely right and needed to be said, he came over as somewhat smug. Although science can and does improve the world, it always takes away something in return. Goldacre spoke with reverence about the miracle of the iron lung, which enabled some polio sufferers with paralysed chest muscles to cheat death and recover from the disease. Yes, that was good, obviously. But the same invention also condemned the ones who didn't recover to years or even decades of a living death, trapped in life-sustaining coffins. Give with one hand and take with the other. That's science for you!

I was starting to wonder if I was completely out of place when I happened to find myself in the audience for a demonstration of pyrotechnics with a selection of explosives set off on stage by a special effects expert (I can't remember his name, unfortunately, but he was a no-nonsense professional). This was more like it! Old fashioned detonators, sizzling fuse wire, fuel-air devices… Hugely enjoyable!

On Sunday evening I went to the first screening of a Hungarian SF film that was almost certainly inspired by Tarkovsky, though I don't recall the name of the director (I don't even remember the name of the film!) The theme of the film was the painful withdrawal effects experienced by humanity when TV, mobile phones and computers suddenly stop working. Cold Turkey in Hungary, so to speak. Bleak but intriguing.

The best event of all, however, was the musical comedian Mitch Benn, who resembles a sort of alternate history Bill Bailey. He sang ironic songs, absurdist songs, and ironic absurdist songs in the voice of a dalek. As an encore he did something extremely well in public that I do extremely badly in private, namely a rendition of Lou Reed's 'Perfect Day' in every separate voice of the singers who produced the communal version for the BBC several years ago. Magnificent! 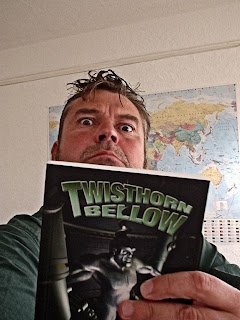 A brief note about accommodation. I am far too poor to afford Heathrow hotel prices, and even if I wasn't I would resent being ripped off. Britain is vastly overpriced and anywhere in the London area is shockingly expensive. So every night I caught a free bus to the airport, loped down the corridors to the Departure Lounge of Terminal One and crashed out there on the seats with a sleeping bag. Total price of accommodation for the weekend? £0 and 0p. An acceptable price…

To sum up, I only went to a fraction of the events and only spoke to a fraction of the people present. I could have made a lot more of Odyssey 2010 if I had tried harder. But I didn't. I am available to be sued for this offence in the Court of Fictional but Very Serious Crimes any day of any week between any hours.

Comments:
i have gone through this blog. nowadays im working from my home as a online businessman. and the above blog is really helpful.