'The Next Big Thing' Thing 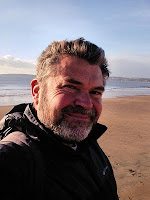 You may already know what ‘The Next Big Thing’ thing involves, but if you don’t I can tell you that it’s a bit like Pyramid Selling but with links instead of cash at stake. A nominated writer will answer a general set of interview questions about his or her writing, and then nominate up to five other writers who are supposed to answer the same questions and also nominate other writers in turn. Everyone who takes part is expected to link both to the writer who nominated them and also to the writers they have nominated.

The main idea is that a network of interviewed writers will grow into a vast tangled web of naked Ego in all its variety, full of flies who thought they were spiders. That’s the way I prefer to see it, anyway. I was nominated twice, so two strands of the web converge on me. I must therefore be a node or a junction or perhaps a knot.

I was nominated first by Bob Lock, a writer who is one of those hard SF fans I was always told existed out there somewhere. He likes his spaceships and robots, does Bob; he's a very generous man too. I was also nominated by Brendan Connell, who I regard as one of the best new writers of ‘weird fiction’ currently active in the world. So here are the questions:

(1) What is the working title of your next book?

I never work on just one book at a time. I usually work on half a dozen or more. I’m currently wrapping up a novella called The Further Fangs of Suet Pudding, which is a sequel to my forthcoming novel The Abnormalities of Stringent Strange (it also happens to be a sequel to an obscure wartime thriller by Adams Farr called The Fangs of Suet Pudding.) I am also in the process of putting together three new story collections, The Senile Pagodas, The Just Not So Stories and The Lunar Tickle. I have also resumed work on a novella I started many years ago called 500 Eyes; and early next year I plan to return to The Clown of the New Eternities, a big novel I’ve been working on since 1994. I also plan to start work soon on my OuLiPo novel, Comfy Rascals. Finishing these projects will eventually leave me in the clear to finish three other novels, Unevensong, Djinn Septic and Wuthering Depths before I embark on my one million word fantasy doorstep novel, The Utopian Chronicles.

Ideas gush from my head all the time. My head is an ideas-fountain. I rarely go in search of ideas; they flow out of me. This was not always the case. When I was young and relatively new to the writing game I found ideas difficult to find and keep. I thought they were hard work. Now they are the fun part of the process. I consider myself to be an ideas-writer first and foremost, rather than any other kind of writer. I don’t need to know where my ideas come from, so I never really ask.

All my books are metafictional postmodernist absurdist comedies. And maybe they are philosophical fantasies and whimsical satires too. The word ‘postmodern’ is a dirty word in many quarters, but I suspect that’s because of the flapdoodle spouted by academics in the field of Cultural Studies or whatever it’s called. I know nothing about the academic side of it; I’ve never read anything by Merlot Pansy or Focault’s Leotards or whoever. I learned my postmodernism from funny, ironic and playful writers on the ground, Donald Barthelme in particular.

(4) What actors would you choose to play the parts of your characters in a movie rendition?

I try to write books that aren’t filmable. If I’m going to write filmable books I might as well just write film scripts. I strive to write the kind of fiction that can’t be replicated in other media, at least not easily. This is one of the reasons I’m so fond of metafictional tricks, wordplay and OuLiPo-style mathematical games with form. Literature should be a unique experience. Mimicking film forms is pointless. The real ‘characters’ in my stories aren’t really the human protagonists anyway; my characters are more likely to be ideas or abstractions.

(5) What is the one-sentence synopsis of your book?

Which book are you referring to? The Further Fangs of Suet Pudding is about apeman good versus marshmallow evil; The Senile Pagodas is a tribute book to sundry authors I admire; The Just Not So Stories is lighthearted absurdism; The Lunar Tickle is absurdist lightheartedness; 500 Eyes is a picaresque tale in the style of Voltaire but odder; The Clown of the New Eternities is my long overdue ‘magnum opus’; Comfy Rascals is a showcase of OuLiPo techniques in novel form...I could go on but I won’t.

(6) Will your book(s) be self-published or represented by an agency?

I may send them to my agent, John Jarrold. Or I may not. I’ll make the decision individually for each one. The majority of my books aren’t money-makers and he’s mainly interested in books that rake in the cash, so there’s no point sending him something like Comfy Rascals, as it will be difficult to sell and not many people will read it. But to me, commercial success isn’t the true measure of whether a book is worthwhile or not.

(7) How long did it take you to write the first draft of the manuscript?

First draft! First draft? I don’t do drafts. I don’t have time. Too many ideas bubbling up every day. If I linger too much on just one project I’ll end up with a massive backlog of ideas to embody. The ideas don’t stop coming, you see, and I have to use them up quickly to avoid brain overload. I have fitted a draft-excluder to my working methods. Nice and snug! There’s only one draft of my books, namely the final draft.

(8) What other books would you compare this story to within your genre?

My favourite authors are Italo Calvino, Stanislaw Lem, Flann O’Brien, Donald Barthelme, Jorge Luis Borges, Boris Vian, Milorad Pavić, John Sladek, and I like to think my work is comparable to theirs. But theirs is much better than mine, of course. Nonetheless we should always aim high in order to get closer to our target. This is essential.

(9) Who or what inspired you to write this book?

(10) What else about the book might pique the reader’s interest?

Huh? The reader has to answer that question, not me. If I start speaking on behalf of the reader I might as well live their entire lives for them. I write the kinds of books I enjoy.

That’s it! So now it’s my turn to nominate other writers, and the writers I have chosen to nominate are:
Des Lewis, not only a legend in his own lifetime but a lifetime in his own legend.
Hannah F. Lawson, a deep-sea diver and the woman I used to live with, but not in the way you’re thinking.
Jason E. Rolfe, a young and upcoming maestro.

I think that watching a film adaptation of 'Twisthorn Bellow' would be an unbelievable experience for me. If a Swansea-based community film making group could help you with a film production, would this be something that you would be interested in?

Would I have to be killed for real in the making of it?