The First Set of Seven Seas 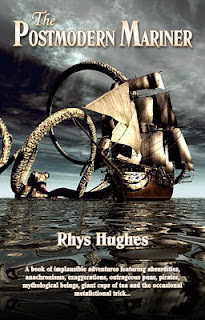 I've just finished writing a new pirate story intended for Jeff VanderMeer's forthcoming pirate anthology. The deadline for submissions is almost up, so I was pleased to finish it last night. I sent it to Jeff a few minutes ago... This new story is called 'The Private Pirates Club' and is cunningly linked to certain stories in The Postmodern Mariner, partly for promotional reasons and partly because I like connections for their own sake... All my stories are linked to each other, or will be eventually. I love chaos but I don't like loose ends!

People keep asking me about the 'good news' I mentioned a few posts back. I still can't reveal what it is, but I have to point out that it's not amazing news, just good news, and it concerns my big novel. Does that help to satisfy any general or specific curiosities?

Life is so much better now than it was just 2 months ago... Incredible how things can change so rapidly. I'm aware they can change back just as quick, so I won't be too smug! Stuart, Monica and myself really need to crack on with the music for the Sereia show. We have decided to nominate March as the month to have the whole project done and dusted... I need to write my text for the Stanislaw Lem tribute project that Livros de Areia are putting together... I have several other short stories to write before turning to longer work (my agent wants me to write a novella for the legendary F&SF and I have agreed)... I need to continue getting fit for my unfeasible bicycle ride from Portugal to Spain... I need to continue with my computer course at the university... I need to plan other trips later in the year (I'm hoping to go to Greece, Macedonia and Serbia)... I need to learn Esperanto: well not need exactly but I've decided it might be fun, and it fits in with my principles.

I'm currently reading Michael Moorcock's The Golden Barge, his first novel, written in 1957 when he was 16. Fifty years old already, that book! Considering it was written by somone so young it's a remarkable piece of work. I wonder how my own fiction at age 16 might compare? I'll never know because everything I wrote between 1980 and 1989 is lost... Well not everything, a few fragments still survive, the earliest dating from 1986... Juvenile work may lack polish and depth, but sometimes it has a more arresting quality -- difficult to specify exactly what -- other than a sort of archetypal ambience -- than more accomplished work. It's a bit like beginner's luck at golf and snooker, I guess. The Golden Barge certainly has this quality, and I believe my own early work did, a basic richness of images, or rather a directness that can be defined as both naive or astute... I know what I mean, but I'm not sure if I'm explaining it very well. No matter!

I splashed out and bought the whole of Proust's À la recherche du temps perdu, but in English, not French, as I don't read French and I can hardly ask my friend Manuela to read all 3000+ pages to me. It's a HUGE book: will I ever read it? Yes, I believe so, all the way through. I am numerologically both shocked and delighted to realise that my 408 short stories contain more wordage than this mighty novel... By 'splashed out' I mean that I got lucky, as I found all three volumes in Oxfam for £5.99 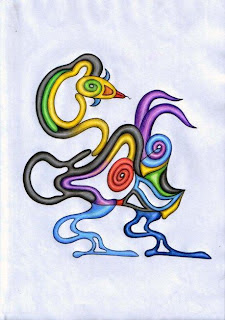 Q. How does one improve a drawing?

A. Simple! One gives it to the wonderful Brankica Bozinovska... and it comes back 10,000 times better.

Swansea is full of monsters. And I'm one of them apparently -- one of the biggest. Do monsters ever apologise? If they do, then I offer (here in public) my apologies to Sinead Ni Bhriain... but to nobody else.

I can't draw, as I've said before, but many other people can... My lovely friend from Macedonia, Brankica, has just sent me some of her drawings. She's a cute sort of brujería who likes to mess up people's hair and create beautiful chaos. Her drawings are wonderful, astounding, delightful, vibrant: they crackle and fizz with energy and colour... They are totally unlike mine. With luck she may allow me to display one or two on this blog. I will certainly ask!

I've just had some good news, but I'm not allowed to say what it is until next week...

In the meantime, if you like Venezuelan psychedelic funk, check out this.
# posted by Rhys Hughes @ 2:38 PM 1 Comments

In Viking Mythology the Fimbulwinter is a time of three successive winters without summer, a time just before the end of the world when snow and ice reign supreme... and yet the gods and monsters and heroes struggle on, hitting each other with axes, drinking mead, going about their everyday Norsey business.

We had a single day of snow in Swansea -- just one -- and everything came to a halt. Remarkable!

The Shortest It Has Ever Been

Hair
I've just had my hair cut very short -- the shortest it has ever been!

Truth
Recently I've been playing around with Yahoo Answers, an online service that can answer any question. These are the questions I have asked so far: One, Two, Three, Four...

Infamy in Spain!
I've just heard from the Madrid based publishing house, Bibliopolis... They are starting a new line called "Malabares" that is dedicated to fiction that straddles the line between fantasy and mainstream... The first few books in the line will be Blue Light by Walter Mosley, In Milton Lumky Territory by Philip K. Dick, The Red Magician by Lisa Goldstein, The Weight of Numbers by Simon Ings and Dream Science by Thomas Palmer.
My own New Universal History of Infamy is also included on this list.
They offered me an advance of 1500 euros. I accepted...

The Postmodern Mariner
Coconuts aren't fruit -- they are nuts -- but they are often carried along on the currents of the ocean... and washed up on distant shores! My new book is like a coconut -- it's pithy, spherical, hairy and full of milk. Also it can be added to curries for that extra exotic flavour. Yum! It is partly set at sea. Like coconuts often are.
Hopefully this book will be published this year. (But I can't be shore.)

Which means that my publishing schedule for 2007 is shaping up as follows:
* A SEREIA DE CURITIBA, Livros de Areia (collection of linked stories published only in Portuguese),
* WORMING THE HARPY, Prime Books (reissue of my first book with an introduction by John Clute and an afterword by E.F. Bleiler),
* A NEW UNIVERSAL HISTORY OF INFAMY, Polis (the Greek customised edition of the American edition),
* THE SMELL OF TELESCOPES, Eibonvale (reprint of my fourth book),
* THE CRYSTAL COSMOS, PS Publishing (my first SF book with an introduction by Michael Bishop),
* THE LESS LONELY PLANET, Humdrumming (my book of 'Happenstance' stories),
* THE POSTMODERN MARINER, Screaming Dreams (my most recent book).

So it's possible I might be having 7 or 8 books published this year, though I won't be surprised if some of these titles drift over into 2008!

Collaborations
I hardly ever do collaborations. I tried when I was younger with several writers and the results were always disappointing. True, I've collaborated very successfully with the cartoonist Anthony Lewis, but he was my illustrator. The only writer I've ever produced a decent piece of work with is Stuart Ross. However, my lovely little Lowri has just suggested that we collaborate on a story together and I couldn't resist the offer! Already I have an idea, a story called 'The Mirror in the Looking Glass', about a mirror that wants to know what it looks like but can't. Because of multiple reflections.