I've deleted my last post. It was an outburst that didn't really represent what I felt about a certain matter. My behaviour has become erratic recently and I need to sort that out before I can proceed with anything else.

The rain has returned to Wales. Fog, mist and a cold wind. The lettuce under my window has started to die.

I spent the weekend on the Gower with Miss Frisbee Girl. We caught a bus to Horton and then walked along the coast to Oxwich. The beach there is amazing... We found a nice place to camp at the base of a dune and made an excellent driftwood fire. The stars were huge and we drank wine and it turned into one of those nights I'll always remember. A couple of hours after midnight I thought it had started raining -- I felt the drops on my face and neck -- but when I opened my eyes the stars were still out. Then I took a closer look at one of the 'raindrops' and saw it was actually a little hoppy creature*. The beach was full of them... They quickly drove us off the sand and onto the dunes!

When dawn came we ran down to the sea hand in hand and jumped into the waves. The water was freezing! Then the sun came up and thawed us out. We walked to Three Cliffs Bay and I persuaded Miss Frisbee Girl to let me carry her across a river** in the old fashioned style. We walked back to Mumbles via Tor Bay, Caswell and Langland, and then stopped in a pub for a few well earned beers. By the time I eventually got home I was utterly shattered, so tired that the following day I didn't leave the house!

This was one of the best weekends I've had for ages and ages. Miss Frisbee Girl isn't very good at remembering the names of places. The only way she can remember the name 'Oxwich' is by thinking of a big cow with a pointy hat.

After my first book was published in 1995, I set myself the goal of having one book published every year. As things turned out, my scheme was soon foiled -- I had no books at all published in 1997, 1999 and 2001. However, 2002 was a three book year for me... But this year looks set to be even more crowded with my volumes: indeed 2007 might turn out to be an EIGHT BOOK YEAR! In random order, those eight books are:

* WORMING THE HARPY, Prime Books (reissue of my first book with an introduction by John Clute and an afterword by E.F. Bleiler),
* A NEW UNIVERSAL HISTORY OF INFAMY, Bibliopolis (the Spanish version of the American edition),
* THE LESS LONELY PLANET, Humdrumming (my book of 'Happenstance' stories),
* A NEW UNIVERSAL HISTORY OF INFAMY, Polis (the Greek customised version of the American edition),
* THE SMELL OF TELESCOPES, Eibonvale (reprint of my fourth book),
* THE CRYSTAL COSMOS, PS Publishing (my first SF book with an introduction by Michael Bishop),
* A SEREIA DE CURITIBA, Livros de Areia (collection of linked stories published only in Portuguese),
* THE POSTMODERN MARINER, Screaming Dreams (my book of linked strange sea stories).

This list is in random order because I have no idea which of the eight is going to be published first. So make your own guess! And while we're at it, let's have a little competition... Anyone who guesses correctly will win a free copy of that particular book. Choose one title only and leave a message here... 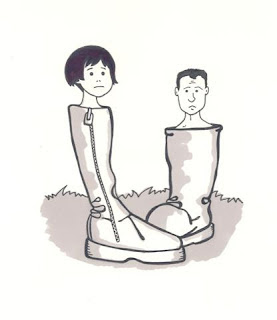 "The fashions adopted by those who attend music festivals are always worthy of note, provided the note is short. I am a regular at festivals of this kind and believe I now have the ability to predict the particular quirk of style and dress that will — in the language of such matters — catch on. My two best guesses for the first WOMBS (World of Music Beyond Sense) festival were ankle length hats and horizon length sleeves. I was pleasantly surprised to learn I was utterly wrong..."
"The hottest fashion items at this festival were neck high boots..."
# posted by Rhys Hughes @ 9:50 AM 0 Comments 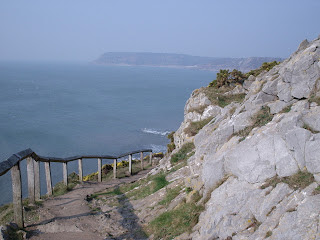 Yesterday I went in search of the phenomenon that I like to call "Prometheus Teddy." Why do I like to call it that? Because I'm pretentious. Ah well! Prometheus Teddy is a teddy bear chained to a cliff somewhere in the Gower, between Pwlldu and Southgate, on one of the more obscure stretches of the coast. I first came upon him in 2003 -- from a distance he looked like a little malign man squatting on a ledge -- and I returned a year later to see if he was still there. He was. So I decided to go back and look again. This time he was gone!

What happened to him? Was he pecked completely away by eagles, or did a miniature Hercules rescue him? Maybe he became a slimy talentless nepotist and got a job at the Dylan Thomas Centre? Who knows? Not I! On a more serious note, it seems that he was part of a memorial, a shrine to two dead people. I took a photo of the plaque bolted to the cliff face next to where he had hung in his chains. Presumably he represented these people in some sense. A grave responsibility for a ted! This photo (as well as the others I took on the way) can be seen on my Flickr account. The Gower is a beautiful place, no doubt about it, but also spooky in parts!

The entire walk took most of the day. It was amazing and delightful and also quite exhausting... I met Miss Frisbee Girl on the way back and we went for a drink. The evening turned out to be incredibly romantic. I am intensely happy right now. I'm in love, in fact, and she's in love with me. I'm trying to persuade her to come to Portugal with me. Maybe she'll come and visit me in Madrid when I get there... But there are six weeks or more before I leave, so plenty of time to arrange stuff like that!

As for writing news... too much is happening to talk about! I've got loads of stuff coming out in loads of places. I'll try to make some sort of list. 2007 might turn out to be an eight book year for me. Crikey! Meanwhile, Queen Zoe of Finland very sweetly posted this photo of herself and her sub-Arctic pals performing in a playified version of one of my short stories. This has filled me with a mild urge to write a play, something very short, or rather to return to a play I started writing back in 1991 but never completed. I turned that unfinished play into the short story 'The End of the Road' in 1992 and it became my first TTA acceptance the following year. Now I want to finally finish the original play version. Then I'm going to send it to Queen Zoe on the offchance that she and her frozen companions will perform it. They probably won't, but they might.