I have just finished my 450th story. It was a 'Don Cosquillas' tale and it means I'm now halfway through writing The Pilgrim's Regress. This book is turning into one of the most daft things I've done! I've given Don Cosquillas a bicycle, a sword and a sidekick panda, and sent him on a journey that involves meeting many characters from my other story cycles. He's like a needle trailing a meta-thread. I'm not using him to tie up loose ends but to pass over and under them, weaving them together into a scarf of recursiveness, something to keep the neck of absurdity warm!

I sometimes ask myself: "What's the most successful story I've ever written?" The answer is probably 'The Old House Under the Snow...' It was my first story to be translated into a foreign language (Serbian) and was my first story to feature as a magazine cover (Postscripts #2). Also it is due to be reprinted in English in Mike Ashley's forthcoming Mammoth Book of Extreme Fantasy and it has just appeared in French translation as 'La vieille maison sous la neige' in Fiction #7. The story concerns explorers who venture into a house buried under snow. Completely unlike the above photograph, which shows explorers climbing a chocolate cake! I haven't taken many photos recently, so I'll have to make do with one from two months ago, showing me on the way to Albarracin. So impressed was I with that part of Spain that I've sent my fictional character Don Cosquillas there to have an adventure or two. My Don Cosquillas series of tales has started to turn into a proper novel called The Pilgrim's Regress and I'm delighted with its progress so far.

I'm playing with a technique B.S. Johnson used, namely anticipating the reactions of potential reviewers and pre-empting their criticisms in the text itself. In other words the text is not only a work of fiction but a criticial commentary on itself. The trick is to make these two aspects work together positively, the plot and its justification reinforcing each other. This might be seen as a rather smug and/or defensive way to write but hopefully the vibrancy of the story itself will be the dominant factor of the work.

It's going to be a highly metafictional novel, featuring author intrusion, the reader as a character, an awareness by the fictional protagonists that they are unreal, etc... People who don't like metafiction will never be charmed by it, but I'm totally at odds with the notion that chronic self-referentiality or acute self-awareness necessarily lessens any emotional impact. On the contrary, metafiction can create a stronger connectivity with the real world (and thus with real emotions) than ordinary fiction for a number of reasons, including the simple fact that standard fiction exists entirely in an hermetically sealed world that only parallels reality while claiming to be real, whereas metafiction is openly aware of our reality, our timeframe. Fiction is a game: one of the rules of the game is that you must never acknowledge this fact. Metafiction plays games with those rules. It's more honest and more clever: a disturbing combination!

I could babble on about metafiction all day... I won't. Different topic: I might be travelling to Portugal at the end of April to give a reading at a conference themed around ‘Writers and Travel’. The conference is taking place in Matosinhos, a town near Porto. I'm really looking forward to going back! Here in Swansea I haven't done much of interest. I went to Three Cliffs Bay with Filiz on Thursday: it was nice but windy! Living with Turkish people means constantly delicious food and incomprehensible soap operas on satellite television. I'm happy! Another good thing: Stuart Ross has started blogging again after too many months of silence. 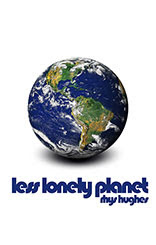 I have been writing Tarzan stories. ‘Tarzan at the Apple’s Core’ was the first, and now I’m close to finishing the second, ‘Tarzan of the Chardonnay’. The third will be ‘Tarzan on Helium’ and I’m toying with doing a fourth that will be a sort of double spoof, ‘Tarzan on the Planet of the Apes’. I’m not sure how legal this all is, probably it’s a trademark violation. Too bad!

My next book, The Less Lonely Planet, is due to be launched on April 26th in London. This is one my most whimsical books and one of my favourites and fairly representative of what I do. Because I was too lazy to proofread The Crystal Cosmos properly when I had the chance, some typographical errors cropped up in the published text. I’ve been far more careful with The Less Lonely Planet. A big dose of gratitude to the excellent Canadian who edited the book, Ian Alexander Martin. He’s also an actor.

Hell of a Boy! 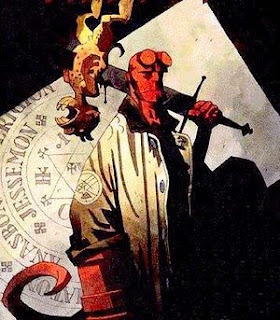 Recently I was asked by Christopher Golden to write a 'Hellboy' story for a proposed anthology, Oddest Jobs. I knew nothing about Hellboy but I usually accept a challenge and so I said yes. Dark Horse Comics were kind enough to send me a stack of graphic novels for educational purposes. I read these, considered the character and his background, and then set to work. The result was 'The Feet of Sciron' and I believe that my story has now been accepted. It's a very weird piece of work for sure!

To be honest I suspect I was rather an unsuitable choice of author for this project, and when I began writing my story I was filled with doubts about my ability to bring it off. My style and ideas are too strange and extreme for mainstream publishers. There are other difficulties: good versus evil isn't something I do, but the Hellboy mythos is concerned with that particular struggle and with personal and universal morality. I'm a bloody minded relativist.
But I bore in mind the example of Philip José Farmer, an intellectual writer who had no hesitation in taking inspiration from pulp forms, from comics, films and other expressions of popular culture. Farmer accepted the protagonists and ideas of such genres on their own terms but he also played postmodernist jokes with them. He was a writer who retold the story of Tarzan in the style of William Burroughs (instead of Edgar Rice Burroughs!)
So when I wrote my Hellboy story I used Farmer as my general guide. I therefore included Farmer as one of my characters, the sort of thing he liked to do with real people. There's a circle here, or part of a circle, or a shape approximating a circle: maybe an ellipse... Incidentally, the art used in the Hellboy comics is truly amazing!
# posted by Rhys Hughes @ 12:48 PM 3 Comments

A Blight on Blighty! 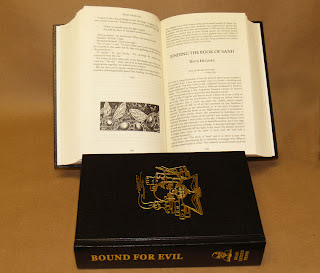 I'm back in blighty now. It's cold, windy, wet.
The moment I landed in Gatwick I wanted to go straight back to Spain. Walking down a street in London I was stopped by the police, who insisted on questioning me in connection with the 'terrorism act' -- because I had stopped to rummage in my rucksack. A nice paranoid welcome from a country that has lost all sense of proportion!
Terrorism is an exaggerated problem: terrorists kill very few people. Cars cause the main carnage. Bad drivers and chavs are the real dangers faced by the people of Britain. Plus the psychological stress caused by stupidly high prices for low quality goods and services.
Now I'm back in Wales and looking forward to seeing my friends again. I have to find a job to pay for my return to Spain. I plan to move to Spain permanently, I don't know exactly when but certainly by 2010. I need to make money first. And learn Spanish properly.
The strange book depicted in the photograph above is an anthology of strange stories about strange books. A collector's item indeed! The same publisher is hopefully issuing my Engelbrecht novel later this year.
# posted by Rhys Hughes @ 9:05 AM 4 Comments

The Return of the King 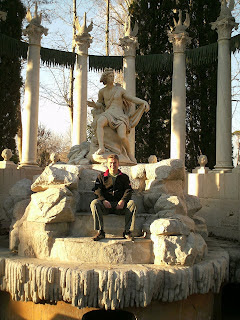 Back to Britain tomorrow. Probably staying one night in London with Sarita: and then to Swansea on Wednesday!

Had a good final week in España. Went to see Cibelle play in a Madrid club, a truly excellent gig, a fusion of experimental, lounge and bossanova.

Went to Aranjuez, one of my favourite cities in Spain, also to Chinchon, another wonderfully preserved old village.

Saw some great films, ate tasty food. Did other stuff.