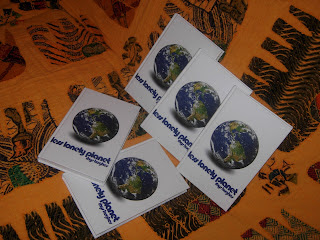 Madrid was a blast as always. I went to an obscure gig that turned out to be very good, a singer called Amelia Ray who was more versatile than the 'blues' label she tags herself with. Madrid is a truly great place for music. A stroll through the backstreets reveals lots of little music clubs and there's something happening every night of the week. Madrid is certainly one of my favourite cities on the face of the planet Earth.

London I feel more ambiguous about. Before this week I would have said that I didn't much like it, but the last few days changed my mind. The first night I stayed in the noisiest hostel imaginable, with a techno club directly below the bedrooms. After that I stayed with Sarita. Over the weekend I explored many of the usual 'sights' and also spent a lot of time at Portobello Road Market. Everything was better than I remembered it!

My new book was launched in a pub near Bond Street. For some reason I thought The Less Lonely Planet was going to be a paperback but in fact it's a chunky hardback and I'm very pleased with the production values. A collection of 32 linked stories dating from 1992 until 2006, it's one of my lightest and most absurd books, and I consider it highly representative of what I do. I hope it sells well, as I eventually want to offer a companion collection called Salty Kiss Island to the same publisher. We'll see! 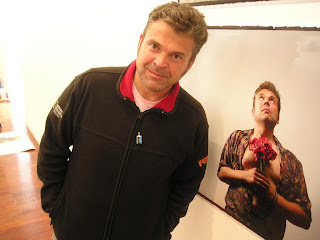 My flight was paid for, so was a hotel room for five days, my taxi fares, all my food and drink. All I had to do in return was give one talk that lasted less than twenty minutes. I was treated extremely well in Matosinhos. Every night sozzled on fine wine, stuffed with good food, I occasionally paused to think about the life of the conference delegate. I don't know exactly how much I consumed for free during my stay but it was surely hundreds of euros' worth. The lugubrious faces of phantom tax payers drifted past...

I had the great honour of being photographed by Daniel Mordzinksi. Above, you see me standing with my own portrait. Is that doubly narcissistic? I hope so. Mordzinski specialises in photographing writers. His style is humorous but profound. His exhibition at the conference was quirky and fascinating. He is famous but modest and charming. The other delegates included Pedro Mota, Karla Suarez, Adriana Lisboa, Cristina Ali Fateh, John Lantigua and many others. And there was excellent music from Vitorino.

The weather wasn't as good as I'd hoped but yesterday I did manage to get in one beach walk and one beach run. That was before the debauchery. One Portuguese writer said to me, "You're Welsh, you're a writer, it's already 8 pm. Why in hell aren't you drunk yet?". I didn't want to disappoint him... My last beer was in a beach bar early in the morning. I woke with a hangover and just made it to the airport on time. Now I'm back in Spain!

I'm leaving windy Swansea again tomorrow for the Literatura em Viagem conference in Matosinhos, Portugal. I've never been to Matosinhos before but I think it's next to the sea, in which case I'll try to enjoy as much beach life as possible, in other words swimming, running and frisbee, if I can find a frisbee partner. I still have no idea what I'm expected to do at the conference: play it by ear seems the best option.

After the conference I'm going to Madrid, then back to London for the launch of my next book, The Less Lonely Planet. The launch takes place at 7:30pm on April 25 at The Grosvenor Arms pub in Grosvenor Street, near Bond Street tube station. Come all ye who dare! As I'm very short of money this trip is going to be interesting to say the least -- the chances of getting stuck somewhere are high!

I've decided to get back into running. I've had an incredibly lazy lifestyle since I returned to Wales and it's not doing me much good. I managed three kilometres before collapsing, but that's not bad after such a long break from physical exercise. Sometimes the buzz from running is amazing, but on this occasion I didn't feel much at all. I need to do more things with my life and get out of the sludge I'm currently stuck in. Exercise is a start!

Filiz has gone to China, to Guangzhou. I'm going to Portugal on Friday (I think it's Friday) and then to Madrid and then to London. The overall shape I make will be a scalene triangle. I guess most trips make irregular shapes and most travellers simply don't care. If I had a favourite geometric shape maybe I would try to replicate it over a large area, but I don't have a favourite. I do have a soft spot for the convex regular 4-polytopes, though. 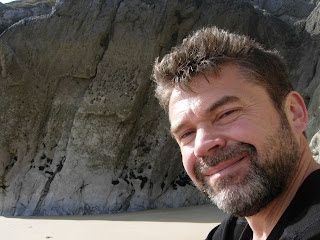 I couldn't resist using that blog title, because I've just finished writing my 451st story! Ray Bradbury was my favourite author when I was 17 and a huge influence on the kind of fiction I tried to write back then. Maybe an influence that strong never really dies?

The title of my 451st story is 'Up Without Away' and is concerned with a paradox of the world's first airport: how did it operate when there was nowhere else to fly to? I've numbered it as a story but actually it's a chapter of my latest novel, or perhaps something between a story and a chapter -- a chaptory. Another ten chaptories and The Pilgrim's Regress will be finished. Then it will be time to catch up with all the other writing I should have done by now but haven't!

Although sometimes sugary and neophobic, Bradbury was capable of writing perfectly balanced prose. My favourite Bradbury stories are 'Homecoming', 'The Scythe' and 'The Fruit at the Bottom of the Bowl' but there are many others almost as good. I'm delighted for the sake of my younger self that (thanks to Pete Crowther) I now share a publisher with Bradbury, but only once have I appeared with him in the same book: the obscure Scaremongers anthology.

Bradbury is an American cultural hero, rather like Charlton Heston who has just died. I prefer to remember Heston not as the raving gun lobbyist of his later life but as the young libertarian who marched with Martin Luther King long before civil rights became fashionable in Hollywood. American cultural heroes have a bizarre tendency to suddenly switch from left to right, from liberal to conservative, from libertarian to statist, when they reach a certain age. Heston and Bradbury and Jimmy Stewart are typical examples. It doesn't lessen the good things they did before the switch, I guess!

I have been invited to take part in a literary convention here in Wales in June -- in what capacity I'm not sure yet. This invitation followed hot on the heels of my complaint that Wales was ignoring me. What bad timing -- but I'm not complaining!

I went to a Turkish restuarant in Mumbles on the weekend to celebrate the birthday of Kemal, the cousin of Filiz. I like Turkish food because there are many vegetarian options, but Indian is still my favourite. My big wish is that Spanish and Portuguese food was more spicy: I need to enlist the aid of my Iberian friends to increase the spice quotient of their local cuisine. With a big communal effort I'm sure effective change can happen! More nuts and many more chillies please. Make it so!

The above photo shows me at Three Cliffs Bay in the Gower where my stubble matches the local geology.

Today I smell smoky. Last night I celebrated the coming of spring with a fire and wine on the beach. It was nice and dry and not too cold. My efforts to enjoy beach life since my return have been frustrated by strong winds and rain, so it was a relief to sit outside without being assailed by the elements!

The timetable for my forthcoming trip to Matosinhos can be found here. The theme of the conference is Writing and Travel. I am representing Wales. Not that Wales is aware of this fact!

Wales will always do its best to remain unaware of me. My kind of writing is too far outside the acceptable limits of Welsh 'literature'. The vast majority of Welsh writers continue to produce either works of social realism that bear no relation to the real world or sentimental self-indulgent Dylaneseque ramblings. Anything clever or abstract is somehow considered to be a betrayal of the 'working class'. I was once accused by a Welsh establishment figure of writing books that "make no allowance for uneducated people."

One other thing... in Italian.

I'm going to Matosinhos in just over two weeks. Huzzah!

March has gone already and now it's spring! Apart from writing I haven't done much since my return: some reading, walking, visiting friends. Last Saturday I went to see a play. I don't go to the theatre very often and this occasion was no exception because the play was performed in an old copper factory! I promised to review it in exchange for free tickets and my review can be found here. It's a short review, some might say slapdash but I'll say succint. The truth is probably somewhere in the middle. Slapcint.

I haven't quite finished my 451st story. If I had I would have titled this blog entry 'Fiction-heit 451' or something along those lines.