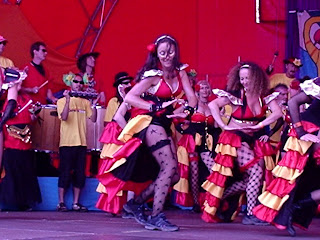 Saturday was carnival day. It rained. I watched the parade and then dashed off to catch the performances at the Waterfront Museum, where Adele was dancing on stage with Samba Tawe. She also performed on Sunday at a different music event called ‘City Streets, Summer Beats’. This photo shows her in action. The Rag Foundation also played at this event. Other bands in attendance included Sheelanagig, who specialise in wild folk from Eastern Europe; and Turkish headliners Oojami, who played a truly vibrant set that featured a belly dancer and a dervish. A few relevant photos (mostly featuring Adele) can be found here.
There is no balance or equality in our likes and dislikes. Some favourite things, such as a favourite child, we keep silent about, to avoid causing offence; of other favourites we are openly proud, for instance our favourite foods, music, films. In each category there is always one thing on which we lavish more care and affection than we will ever give to any alternative. This messy preamble is inexorably leading to the announcement that one of my own favourites is about to be born after a long gestation – my favourite book of all I have yet written.
Here’s a hint as to its nature.
# posted by Rhys Hughes @ 1:19 PM 0 Comments 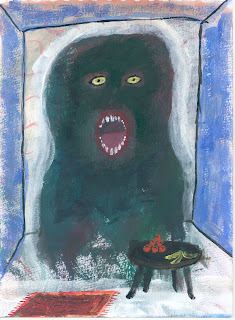 or paint, as I've often confessed, but Adele has encouraged me to have a go anyway. Several years have passed since my last oil painting, Palm Whale, but I actually enjoy the process more than I allow myself to believe. Unlike the writing of fiction it's not necessary for me to be good at painting and I find that factor (or anti-factor) in the equation of this particular creative pursuit to be rather relaxing. Here are the first two efforts of my daubing renaissance:
(1) Cuidado, the Hungry Ghost Wants Fruit!
(2) The Moon Takes a Midnight Dip 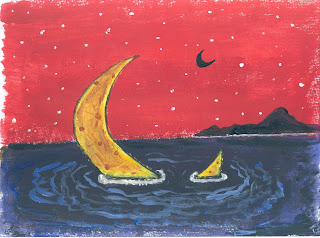 Meanwhile I'm delighted to report that Steve Upham of Screaming Dreams has made further improvements in his health. He has even returned to some publishing duties, to the extent that The Postmodern Mariner is now available to order directly from his website. Please do so if you like my work and have the cash: but don't if you're poor and I'm one of your bêtes noire! One of the tricks in my book concerns the fact that the eponymous hero interviews the eight Sea of Tea pirates for his blog. The interviews aren't present in the book because I planned to post them online instead. A nice metafictional joke! However, I've been really lazy at doing this and only two of the interviews are ready, the first with The Pirate Princess, and the second with China Melville. The latter interview (containing a link to the former) can be found here. The others will follow soon!
# posted by Rhys Hughes @ 9:13 AM 2 Comments

I have just completed a new novel entitled Mr Gum. It's my most depraved and salacious work, a book that both satirises and feeds the tropes of our pop culture. I am very happy with it. The oddness of the concepts, the trickiness of the plot and subplots, the wordgames and recursive linkages serve mainly to carry the relentless filth. Self-glorification is very much a secondary concern in the development of the story: my ego plays second fiddle to the obscenity. Or perhaps second oboe. That's very unusual for me.

The book disgusts even me. I find that notion charmingly warped. The 'Afterword' to the novel is neither a true afterword nor a story but something halfway between. I have posted it (minus footnotes) on my Postmodern Mariner blog here. It says pretty much everything about the thematic and stylistic excesses of Mr Gum, the reasons I had to write the book and my general thoughts on modern puerility. It is a passive-aggressive apologia, saturated with bad faith and yet completely honest.

I promised Adele I would publish Mr Gum under a pseudonym (if ever it gets published) to spare her the embarrasment of being associated with it even at a distance. Whether a potential publisher will agree to this notion remains to be seen. It is easy to make promises one can't keep. Conversely it's even easier to keep promises one hasn't made. Adele is sweet and bright; my novel is sour and dark, but curiously light-hearted in its grotesqueries. Here follows a complete contents list. Astute readers will notice that the first part has already been published as a separate novella in the first issue of the magazine Polluto.

Part One: The Creative Writing Tutor
· Oh, Whistle While You Work, and I’ll Come to You, My Dwarf
· Boo to a Goose
· Whaling Well
· The Tenant of Arcimboldo Hall
· Canon Alberic’s Photo-Album

Part Two: Up a Gumtree
· The Groin Scratcher
· Plop Fiction

Part Four: Gum, Set and Match
· The Glue of the Scream
· Afterword 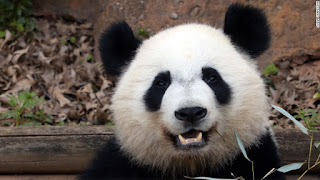 This has been the dampest summer I can remember. An endless ceiling of cloud has covered the city for the past few weeks. Summer activities have been reduced to a minimum. We did play tennis last weekend (in the rain) and tried to have a fire on the beach -- the wet wood spluttered out after a short time. Frisbee has been impossible because of the endless winds and even the old fashioned water pistol duel doesn't seem as much fun when you are already wet. All this leads me to conclude that travelling will soon be necessary, don't know where, how or when yet. All I know is why.

Writing news: I have just begun work on the final chapter of my new novel, Mr Gum. Another week should see the completion of that, then I can return to working on The Pilgrim's Regress. The disorganised way I write books never ceases to surprise me. I'll probably never reform so I should learn not to worry about it too much, but I do often forget the plots when I break off a work for any length of time. When that happens, the completed book turns out to be quite different from the original conception. I suppose it doesn't matter too much!