I have just completed the first chapter of my Twisthorn Bellow novel and started on the second. As there will be seven chapters in total, each approximately 10,000 words in length, another two weeks of effort should see me more than halfway through the book. By the end of March it might be ready to submit...

The monsters, musicians and other uglies that my heroes have to battle agains 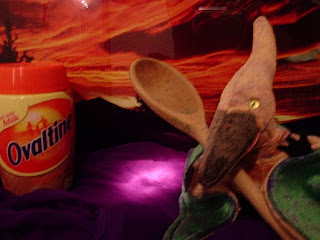 t include prehistoric creatures such as pterodactyls, and this photo shows one of those dastardly flying reptiles relaxing after a hard day's work. The work of a pterodactyl includes soaring, swooping and croaking. This example of the species is preparing a nice nightcap of Ovaltine, one of the few reliable methods by which a stressed pterodactyl can become a calmodactyl. Or so it's said...
It may be wondered why Twisthorn and his colleagues fight musicians as well as more obvious manifestations of evil such as vampires. The answer is that both are beyond logical sense. Consider 'All Along the Watchtower' by Bob Dylan. A watchtower is primarily a vertical structure providing minimal opportunity for horizontal movement. So how can anything go all along it? If Dylan had entitled his song 'Up and Down the Watchtower' there would be no difficulties. But he didn't. He blatantly ignored the overriding vertical component of the edifice in question... For further discussion of this topic click here.
Illogic. That's the real enemy...
# posted by Rhys Hughes @ 12:47 PM 6 Comments

This photo shows the fiendish Crystalbonce. He may look like a bulldog clip balanced on an inverted tealight with a yellow crystal for a head, but I assure you that Crystalbonce is an extremely suave and dastardly robotic being. He's French and his fearsome cry of "C'est pour toi que je suis!" has been known to strike terror even into the unbeating hearts of golems. Which is unfortunate for the hero of the book I've just started writing... 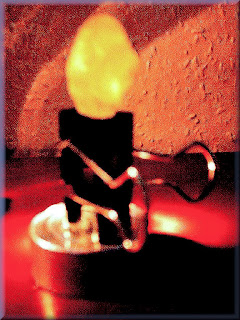 Twisthorn Bellow is an animated clay statue who accidentally falls into a vat of nitro-glycerin, turning him into a living stick of dynamite. He can't use deodorant: his sweat is too risky for that. Together with his sidekicks, Hapi Daze (a giant hand that clicks its fingers to perform feats of telekinesis) and Miss Abortia Stake (a sentient embryo with the power to induce fits of weeping), the morally ambiguous Twisthorn fights real or imagined paranormal threats and conspiracies everywhere. His weapon of choice is a Nubian kpinga, partly because he's an ethnological snob.

Apart from Crystalbonce, his many enemies include the inverted gangster Upside Downey Jr, the were-clown Guttersnipe Chutney, the entire government of France, and Philip José Farmer... Twisthorn has only one mandate: the smashing of unspeakable phenomena! He must battle against vampires, demons, gargoyles, musicians, lamiae, chimeras, basilisks, moths and sundry French things in order to preserve his reputation and maybe earn a knighthood from the Queen. Can he do it? Will he ever be published if he does? I just don't know! 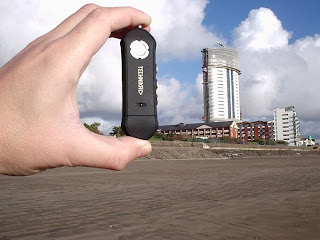 I have just saved everything I've ever written onto an MP3 player which doubles as a memory stick. Actually it's not everything, just all my completed fiction from my earliest surviving tale to my most recent. Almost 20 years of relentless activity stored (with plenty of room to spare) inside a black tubular thing no longer than one of my fingers. Incredible! I did a word count at the same time and learned that so far I've written 1,824,485 words of fiction.

I am often described as 'prolific' but a simple calculation reveals that the above figure divided by my current total of finished tales (468 and rising fast) gives an average of 3898 words for each story. This can be extrapolated into the future. I plan to write exactly 1000 stories in my lifetime, so the grand total at the end of my career should be about 3,898,472 words. Almost four million words. In other words only about 10% of the total of Max Brand.

It's amusing to note that although my entire output easily fits inside a small memory stick, it is still larger than another uncompleted work: the Meridian Quay Tower, the tallest building in Swansea. An assertion proved by this photograph! 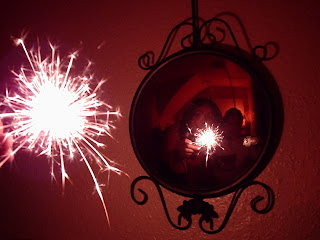 Despite the wine, cider, music and sparklers, we celebrated New Year's Eve in a fairly restrained style. Somewhere along the line I stopped being a wild party animal. Nightclubs don't interest me much anymore and it was a relief not to wake up the following morning with a hangover. Many years ago when I was a student I actually consumed enough alcohol to last me the rest of my life, so I don't feel I'm missing anything!

We are in the middle of an old-fashioned winter, the sort of winter they don't make anymore, icy and crisp with a pale blue sky and a weak low sun. Much better than wind and rain! We've been playing tennis on the beach to warm ourselves up. Meanwhile I've nearly finished my first story of 2009, a mini-epic called 'Hell Toupée' about a stiltwalking abominable snowman who becomes the founder of a new dynasty of Vegetarian Aztecs.
# posted by Rhys Hughes @ 9:39 AM 11 Comments