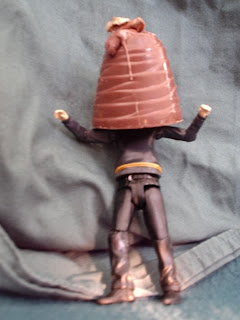 The monsters featured so far have been fairly minor villains, but now at last we can see the arch-scoundrel who ultimately controls them all. His name is République Nutt and he's French! These three photos show him in various dastardly scenarios. First we are presented with a frontal view, showing his posture and the fiendish Walnut Whip Helmet that he wears atop his head. The Walnut Whip Helmet has the power to create unfounded rumours and transmit them across vast distances on a tight beam! One of the first rumours it created was the rumour of its own existence in a cavern deep under the city of Strasbourg. That's how République Nutt was able to get hold of it! 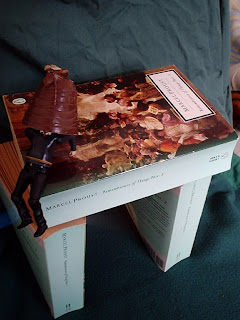 In his subterranean hideout the merciless rascal divides his time between taking over the world and reading Proust. The second photo shows him cavorting on the summit of the profane temple he has constructed to worship his favourite writer. Hideous! An earlier adventure featuring République Nutt before he forced the Walnut Whip Helmet onto his cranium can be found in my book Journeys Beyond Advice. But the third photo shows him much later, after he got stuck in a brandy bottle. Brandy is French. The truth is that French culture is superior to British: and that's precisely what makes République Nutt so dangerous. He's in the right! 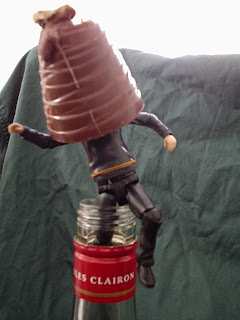 Yin and Yang are the primary forces of the universe, the duality that governs the actions of Nature and its Children, including Mankind... Light and dark, good and evil, male and female, hot and cold, cool and square, up and down, left and right, this and that, funky and soulless. In balance each half of the duality contains the other half. In every yin a speck of yang; in every yang a speck of yin. When this hallowed law is violated the powers of unhappiness stir. The Walnut Whip Helmet… Chocolate and nuts… No balance there. No yin meshed with yang, yang meshed with yin. No harmony. Absolutely not! Disharmony, blockage, asymmetry, chaotic whirling of French madness… Nuts with chocolate. For the love of purity, NO!!! 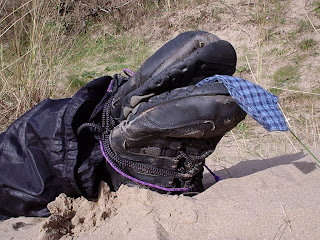 The monsters that oppose Twisthorn Bellow just keep getting worse. Worse in the pejorative sense! Here we see Baddie TwoShoes, a sort of footwear komodo. He's the pet monster of Lord Doublestuff, who always does everything twice. In keeping with his owner, Baddie TwoShoes has two soles. But he has three tongues, as this photo clearly shoes -- I mean shows! It's always good to break with tradition. Baddie, Baddie TwoShoes, you don't think, don't joke, what do you do? Eat goodies, is the probable answer to that! 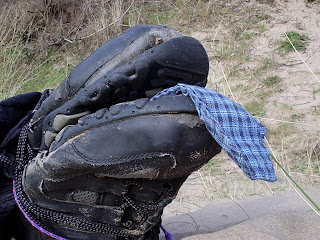 Four chapters of Twisthorn Bellow have now been completed and I've just started the fifth. Apart from writing I've spent some hours helping out on Adele's allotment. Her plot was very overgrown and needed lots of work -- exactly like the plot of my novel! Because I'm currently out of physical shape my joints were unbelievably sore in the aftermath of my efforts -- exactly like the monsters in my novel! Can't think of any other connections between gardening and my novel. So I'l just mention that the third part of my interview with Americymru is now online here. In this part I ask the questions and the world answers. That's the idea anyway! 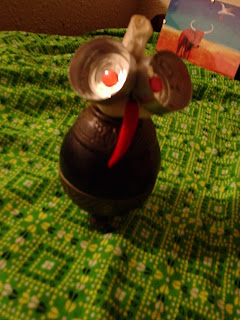 Two more monsters for you. Monsters ought to be bad and this pair are very bad -- badly done! The first monster is the shape-changing robot Tiktac Spittlegit. He's not French but he's malign! He can transform into any domestic object and actually has no 'basic' topology. Here we see him changing so rapidly between the forms of garlic bulb, bird eye chilli, mate gourd, tealight case and drawing pin that he appears to be all those things simultaneously. Which makes him look like a sort of owl. A bad owl. This photo of him was done last night, on a Monday. Owls don't like Mondays. They want to hoot the whole day down. 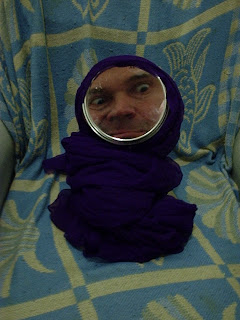 Ruby dubDub on the other hand bears an uncanny resemblance to myself. Pure coincidence. She is a female monster with a taste in Jamaican music who keeps her dreads under her burnoose. Ruby's dreads, of course, have nothing to do with her hair. They are more literal than that... Her one redeeming feature is that she reads the magazine Postscripts, which is an incredibly cheap and corny way of publicing the fact that issue #18 is now out, featuring my story 'The Gala of Implausible Songs'. Of the several hundred stories I've written, this is certainly in my top 10 personal favourites, though I don't know exactly in what position it can be found. 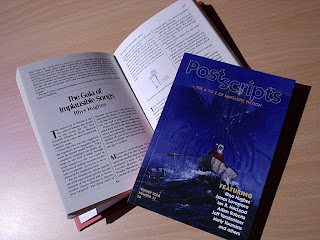 Soon I'll have to start trying to make a cover for my Mister Gum novel. My idea is to make the outline of a miniature Cerne Abbas giant out of winegums on the beach and photograph that image as the tide comes in. I might scatter some props in the vicinity too: a bicorn hat, if I can get hold of one; a pistol, probably fake; maybe a toy snake. The result might be fairly evocative of what happens in the novel. I think the publisher of this book had difficulties finding an artist willing to take the project on, which is why he allowed me to have a go. I wish I had more talent with visual images. Or maybe I don't wish that!

The second part of my Americymru interview is now online here...

The second chapter of Twisthorn Bellow is finished and the third is progressing well. The first chapter is called 'The Wings of Phoebus'; the second is 'The Pots of Pan'; the third is 'The Skin of Marsyas'; and others will be 'The Earlobes of Aesop' and 'The Shoelaces of Jupiter'... I intend to use classical allusions for all the chapters. That's the sort of man I am. The final chapter will probably be called 'The Clangers of Paris', but the Paris in question is the Trojan man rather than the French capital. Having said that, the main action is narrated by the Eiffel Tower... 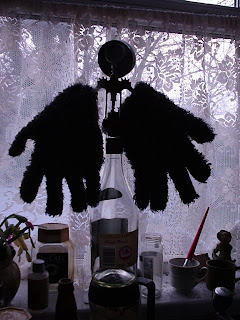 The latest monster to join the pantheon of baddies ranged against our hero isn't French but Prussian. Here we see him in action. Enid Hans. He has massive hands! Not only can he use them to grip and gesture, but they enable him to fly too. That's quite bad! In an emergency he can even open bottles of wine. Makes him more sociable... Despite the paucity of my photography skills, as evidenced here, I have managed to trick the publishers of my forthcoming Mister Gum novel into letting me do that book's cover! 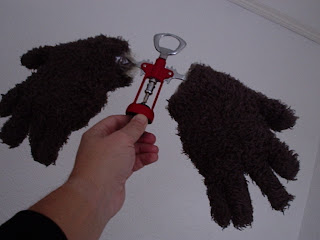 Smugness, pretension, insufferability... Somebody has to take on those responsibilities. Never one to shirk my duties -- except when it suits me -- I recently took great care to ensure that those three qualities featured prominently in this interview I have just given to the Americymru Network, an online community dedicated to things that are American and/or Welsh. The interview will be in three parts. In part three I plan to ask the questions to you. That's not the way things are normally done. Are you ready?