The last time I went to Prague was a few weeks before the old country of Czechoslovakia split into the Czech Republic and Slovakia. It was the middle of winter and very cold. I was already aware that Prague had produced a dozen or so giants of literature, but I didn't yet know that Gustav Meyrink was one of them. I worshipped Kafka, Hrabal, Čapek, Hašek and especially Nesvadba. It was only after leaving Prague that I began reading Meyrink; and then I gradually came to realise that an opportunity had been lost, for it seems to me now that Meyrink is perhaps a better guide to the complex symmetries of that labyrinthine city than any of those other gentlemen, not in terms of geography or culture but in ambience and atmosphere. 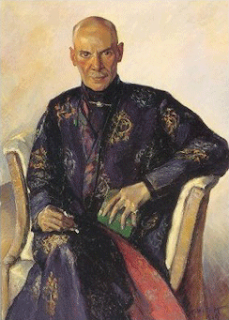 Seventeen years have passed since then. A few weeks ago I was mildly astonished to be asked by a Romanian publisher to write a story for a Meyrink tribute anthology, Cinnabar's Gnosis. I jumped at the chance, even though this meant temporarily abandoning work on my 500th story. My Meyrink tribute story is finished and has been accepted for the anthology. One paradoxical result of this situation is that I have completed my 501st story before my 500th. Creative accounting will now be necessary to balance the books... but at least there's a precedent for non-linearity in my evolving corpus -- a few years ago the wonderful Michael Bishop very generously wrote my 612th story, to save me the trouble.

Of course, when I say that my story has been 'accepted' it's always possible that the Romanian publisher might later 'do a Roden' and pretend he hasn't accepted it, but I doubt it. He seems a man of honour and integrity... Doing a Roden (or to Rodenize; verb) is to act in a hypocritical, nepotistic style; to scheme and bully at every opportunity. The origins of this word can be found in the behaviour of the two most devious editors I have worked with in twenty years of writing fiction. A league seems to be forming against them: I smell the beginnings of a downfall. And despite the proverb, it's the lowdown who fall the furthest... 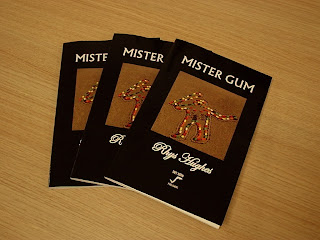 My new novel has been published at last. I began writing it three years ago and finished it last year. Now it's available to be read. It's very rude; in fact it's the most obscene thing I've written, even naughtier than The Percolated Stars. I also happen to believe it's my funniest book to date. I now look forward to shocked reviews. But then again, we live in a jaded world, so people probably won't even bat an eyelid. Ah well! It seems that a 10,000 word extract from Mister Gum has already been selected to appear in a 'Year's Best' anthology; and this is something that provides me with a certain grim satisfaction -- I'm always overlooked for the Datlow and Jones anthologies (mayhap for political reasons?) 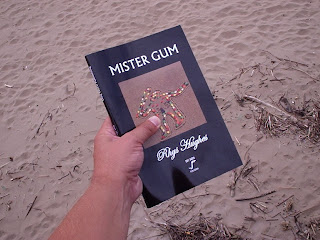 Back to the promotion of my new novel... Gums generally hold teeth; but this gum is held by a hand. The design for the cover was made on this beach, and here's a photo of it superimposed on the same beach. Blessed recursion or what? A great deal of Mister Gum was written last year in a public library when I was in dire straits financially. I had no computer of my own. I even had to rely on tins of food donated by friends and sleep on a golf course. But at least I kept my aristocratic dignity and never stooped to taking a paid job. That's the way I prefer to see it, anyway.

Other news: I'm still working on my 500th story; and still working on my Gustav Meyrink tribute story; and I'm also putting together a possible collection for a Romanian publisher. Plus there's a chance I might have found a publisher for my Tallest Stories book. An electronic version of Twisthorn Bellow should be available later this year. If all goes to plan, that is... 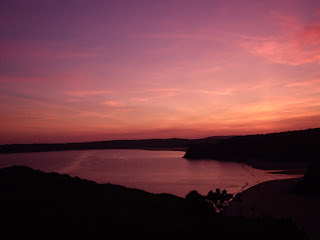 The weather has finally been good enough to permit a resumption of outdoor life. So we decided to go walking on the Gower. We set off on Thursday afternoon and arrived in Three Cliffs Bay in time to watch the sunset from the cliffs. We collected enough driftwood to make a decent fire and drank wine and watched the stars, then slept on the beach. In a month or so it will be too cold to do this sort of thing without extra equipment. A gorgeous sunrise was followed by a swim in the sea, only the second time we have been swimming this year. We spent the whole day on the beach and watched another glorious sunset. Although the Gower is my own backyard it somehow influenced me to look like a tourist. We are planning a much more arduous jaunt on Tuesday, namely a non-stop walk from Swansea to Rhossili. 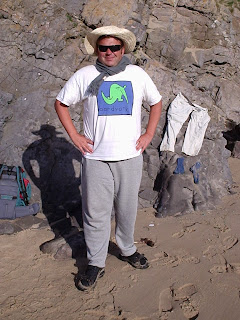 Now for writing: the first review of Mister Gum has appeared here, which proves that the book does in fact exist, though I haven't seen it yet... I believe I also have a chapbook called Madonna Park due out any day now... I might have two other chapbooks to follow that one, called respectively The Fanny Fables and Plutonian Parodies... I'm still working on my 500th story... I'm also writing a story for an anthology themed around the eccentric author Gustav Meyrink. It is set in Prague, so I have been dredging my memory for images of that truly amazing city (I haven't been there since 1992)... Naturally enough, other news will be reported as it happens. 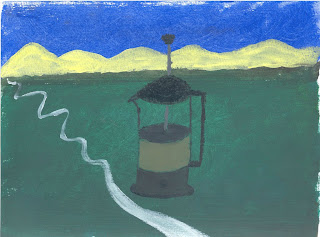 Not much has happened in the past week. I thought about including a picture of 'nothing' to illustrate this lack of activity, but I'm not sure what nothing looks like. I know what it doesn't look like, but that's not especially helpful. I therefore include a painting of a giant coffee pot on a rather boring landscape instead. It's a terrible painting, but I did it last year and the statute of limitations has expired, so I can't be blamed for it now.

I'm still working on my 500th story and expect to be doing so for a while yet... I have also been putting some new chapbooks together... According to the publisher of Mister Gum, the book has now been published, but I won't blog about it until I receive some copies... I have agreed to judge the BFS short story competition... I recently started a new blog devoted to flash absurdist fiction, a project that will consist of exactly 100 short tales by various writers. It is open to submissions but there's no payment involved, little status and almost no readership.