Annus Scribblus (A Personal Review of 2009) 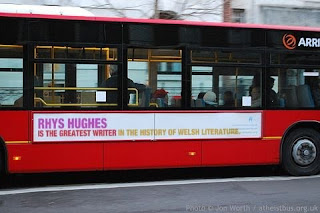 Another year is almost over. 2009 was my most productive writing year ever. In fact I regard it as my Annus Scribblus. I attained several long-standing goals: I wrote my 500th story (in fact I'm now on number 512); I broke the 200,000 words barrier for a single year; and I passed the two million words mark for total fiction written in my career. In essence, my annual output doubled. All this was a good way to celebrate the fact that exactly twenty years have passed since my earliest surviving story. I have been a writer for two full decades! 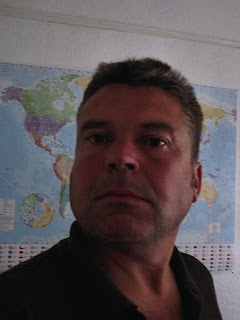 In the past twelve months I wrote a novel, a novella, four novelettes and plenty of short stories, 45 in total. Coincidentally, that's the same number of stories that appear in Donald Barthelme's recent (posthumous) collection, Flying to America, a book that ended up being one of the volumes I most enjoyed reading in 2009. Returning to Barthelme was almost as big a revelation as discovering him for the first time, in my long-lost youth. What a genius, what an ironist, what a philosopher! For the complete list of my other favourite reads of the year follow this link. 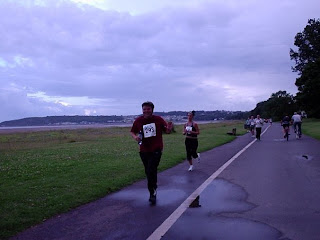 I believe I created some of my best work this year, stories such as 'Southbound Satin' and 'The Impossible Inferno', both of which will appear in my forthcoming Ex Occidente collection in 2010, a volume that contains most of my finest fiction from the past ten years. I also finally finished my grand linked collection of fantastical pub tales, Tallest Stories, and another collection, the slightly more restrained Mirrors in the Deluge. 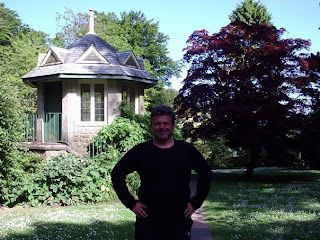 As for my publications: my novel, Mister Gum, was published last September; and two new chapbooks, Madonna Park and Plutonian Parodies, appeared shortly afterwards. Various stories found homes in various anthologies and magazines. All very nice! But what about non-literary activities? Ah, that's where 2009 comes unstuck... 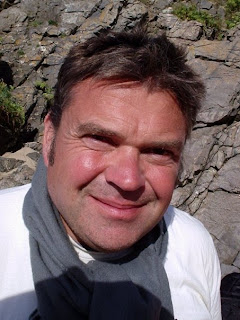 This was an incredibly static year for me. Apart from writing and reading, I actually did very little. Outdoor activities suffered the most. To be fair, the abysmal Welsh weather didn't help matters: in the entire summer I only managed two bivouacking adventures, and although I did manage to get back into running and completed a 5K charity race, I didn't keep up my regime, with the result that I lapsed back into unfitness, the state I'm currently in. 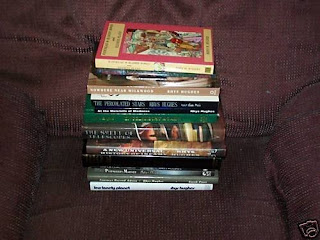 Next year will be different... I don't intend to stop writing, or even take a proper break (I have to finish another novel and write at least two novellas) but the pressure will be less: the headlong rush to the halfway point is over. Writing as the only significant activity in my life is a strategy I don't intend to repeat! I must travel again in 2010; indeed I am planning a trip to Romania that will include Turkey, Bulgaria, Serbia, Albania, Macedonia and Greece. So it only remains for me to wish you all: 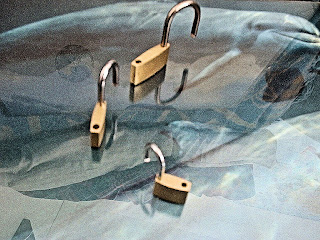 My digital camera has finally given up the ghost. For five years it did sterling service at home and abroad, surviving treks through mountain ranges, desert sandstorms and the humidity of tropical mangrove swamps. I think that forcing it to take pictures of phoney monsters was its ultimate undoing. Finally it could take no more and committed suicide! So now I need to buy a new camera. Here you see two of the last photos it managed to take before its demise. They are monsters that originally had no part in Twisthorn Bellow but were added at the last moment. In essence they were afterthoughts. The first photo shows Bob the Lock swimming serenely with his wife, Raypova, and his son, Paddy. The second photo shows Janrel MacScabbard balancing on a cairn that is being carried on the back of a dolphin. That happened in Patagonia; and if you look closely you can see a ghostly set of books in the mountains. Spooky! Educational! 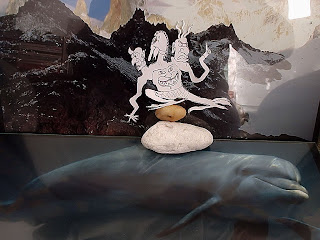 I am currently writing my last story of 2009. The story is called 'The Darkest White' and is intended for a Bulgakov tribute volume due out next year from Ex Occidente Press. Lots of research has been necessary for this piece. The politics and history of the Caspian region during the Russian Civil War is bewildering, to say the least! My story begins in Abkhazia, moves eastwards to Khevsuria and Baku, then crosses to Turkestan in the last days of the Centrocaspian Dictatorship. Part of the action is set on an island in the Garabogazköl, and then in Bukhara under Alim Khan, and then in the Fergana Valley in the early days of the Basmachi movement, and then in Urga during the rule of Ungern-Sternberg. The Czech Legion plays a part later, and so does the remarkable Anatoly Pepelyayev, the White general who simply refused to give up. And this is the point at which my tale starts getting really complicated...

In the meantime, Happy Winter Solstice, Merry Christmas and a Jubilant New Year to you all...

It appears that my book Nowhere Near Milk Wood is now mostly available for free on Google Books. Here it is. Some pages are missing, but a lot of the text can be read intact, and because many of the 'chapters' may easily be read as standalone tales (even though the book was structured as an edifice of linked adventures) I urge you to take this opportunity, if such is your inclination. For instance the first part of the book, the novella 'Martyr to Music', is there in its entirety. The second and third parts aren't complete, but the second part, 'Taller Stories', has recently been cancelled out anyway, by the writing of my Tallest Stories book (that volume is still sitting with the publisher)... 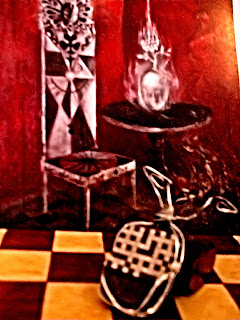 I guess I ought to talk about my forthcoming Ex Occidente book. I'll do that in the coming weeks. At the moment I'm still submitting stories to Dan Ghetu; and in fact I've sent him much of my best work from the past ten years. The Impossible Inferno will be my most substantial volume ever, crammed with novellas and novelettes as well as short stories. Naturally, there's a lot of crossover between Nowhere Near Milk Wood, Tallest Stories, The Impossible Inferno and Twisthorn Bellow; and so here's another image of a monster to celebrate the fact. Behold the robot villain, Sappy Ever After, relaxing in his private chambers in the city of Moonville just prior to being mailed as a parcel to his enemies. He has an incorrectly completed crossword for a face and this explains his cryptic but pithy fury!

The Twist in the Proof

I have finally finished proofreading my novel Twisthorn Bellow. I delayed this task as long as possible, even to the extent of telling the publisher I had lost the ARC copy and only found it last week (in truth the book has been sitting on my table since I received it a month ago). I find proofreading an extremely difficult thing to do. The fact that the rhythms of the prose are set in my mind makes the spotting of errors extra problematic: I tend to read what's already in my head rather than what's on the page before me. No matter: it's done now! And this means the electronic version of TB can be bought right now, if such is your inclination! It can be obtained here. Yippee! 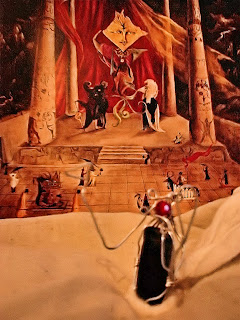 I was delighted to receive a superb blurb from the legendary Mike Mignola about my novel and that blurb can be found here. I like the way that things can be found in places. Or if not in places then at certain times. Or if not in places or times, then nowhere. But at least they can be found in nowhere: that's saying a lot. These two photos are portraits of two monsters that can be found in my book. The first one shows the robot Highly Contrived Name at home in the city of Moonville. The second one shows Ruby dubDub standing above an indoor sundial. My publisher, the redoubtable Ian Alexander Martin, doesn't believe in indoor sundials, but they do exist. Here's mine. It may be noted that Ruby dubDub has a different face from the face in her earlier portrait, but that's normal for her. She also appears to have acquired the hands of Enid Hans. Ah well! 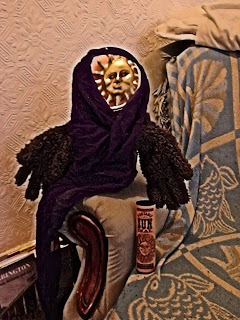 It has just occurred to me that I never revealed the place where my earlier novel Mister Gum can be obtained. I blogged about it without providing a link to the publisher. What an oversight! It can be bought here. Other news: I have just sent a new collection called Mirrors in the Deluge to a different publisher. I put this book together a while ago but had to wait for the publisher to open his submission gates again. The moment those gates were ajar I was inside: like a comparison up a drainpipe! Also I might finally be published in book form in France. I think it's in book form. I'd better go and find out... 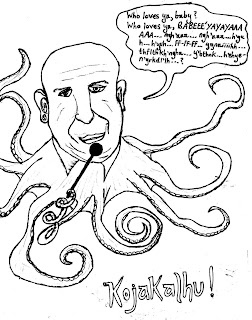 This creature is the dreaded Kojakalhu... Half New York City detective, half unspeakable cosmic octopus, he is one of the monsters to be found in my Plutonian Parodies chapbook. And now he's in a position to announce the results of the Poe-themed competition I ran last week. The winner is Ross Warren, who managed to get 9 out of the 13 references. In second place came Ricardo Tinoco. I hope both these fellows will enjoy their prizes when they get them. This was a fiendishly difficult competition. Full details of all the references in the photograph can be found here. Meanwhile, these other drawings have nothing to do with my chapbooks as far as I'm aware, but you never know... 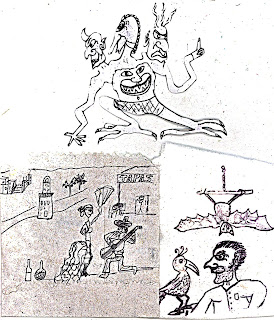 I have finally crossed the Two Million Words (in total) mark! But I still have another 11,000 words to write to reach 200,000 words for the year 2009. I'll do that with a story I'm about to start writing for a Bulgakov tribute book. Some writers truly need tribute volumes; and Bulgakov is one of the most deserving. Another is Milorad Pavic, who died yesterday. One of the greatest writers of the 20th Century, he was a vast influence on my own writing: among many other techniques he taught me the value of creating an utterly original metaphor and then stretching it so far that it snaps, making a uniquely musical sound...