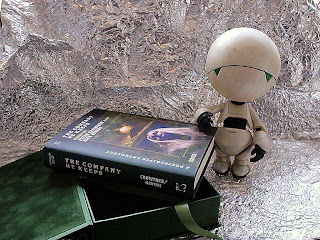 In recent months I have finally set up my own website. It's still under construction but already it features lists, pictures and blather. Click on this link to view it. Utilising the same sort of deception habitual to transformers, it is actually a blog disguised as a website! Nonetheless it's a useful hub for transport to my other blogs as well as containing more information about my work than you'll ever need to know. 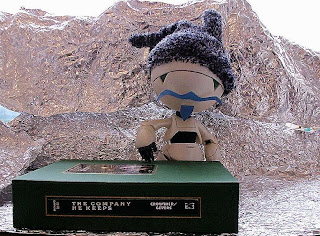 Talking about robots reminds me that the latest issue of Postscripts 22/23 (The Company He Keeps) is now available and that it contains my robot story 'The Forever Forest'. I enjoy writing robot stories. I get a buzz out of robots in general. This latest issue of Postscripts is easily the finest so far, so beautifully produced that it came in its own velvet-lined box and so enormous that it can be used for the torso of an authentic man-sized robot. Mind you, some of the best robots in fiction are bigger or smaller than the biggest or smallest men, and a few even have shapes that are incomprehensible.

My favourite robot fiction of all is probably Stanislaw Lem's Cyberiad, which is a sort of compendium of robot myths from the future. Myths from the future are a relatively recent invention. Lem is a master of the the artform. Moorcock's Legends from the End of Time are also among the best of this extremely unusual subgenre. I've written a short piece praising Lem's magnificent book here. 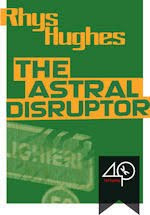 40K (Fortykey) are a publishing house based in Italy. They specialise in ebooks in a variety of languages, Italian, English, French, Spanish and Brazilian Portuguese. Each of their ebooks is a short story or essay with an average length of 40,000 characters, in other words about 8000 words, hence the company name. So far they have published works by Bruce Sterling, Dario Tonani, Jacob Appel, Kristine Kathryn Rusch, Thierry Crouzet, Paul Di Filippo, Mike Resnick and many others. The list of great authors is growing all the time and prices are low, just €2.90 per ebook.

I am pleased that some of my own efforts are going to be issued by 40K. First up is a story I wrote called 'The Astral Disruptor', the inaugural exploit in a projected series of tales set in the imaginary land of Litalia, where every city is named after an Italian writer and has some inherent quality reminiscent of the style of that writer. 'The Astral Disruptor' ('Il Disgregatore Astrale' in Italian) is set in the city of Buzzati and features the renowned absurdity investigator, Sampietro Mischief. I hope to write many more adventures involving this fine gentleman and his monstrous servant, Chives, probably set in other Litalian cities, such as Eco, Levi, Gadda, Dante, Ariosto and Svevo, etc. 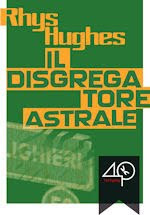 To be published in Italian is, for me, a deeply satisfying experience, as it's no secret that my favourite writer of all time is Italo Calvino. One of the things I love so much about Calvino is that he says everything I want to say, and says it better than I could manage, thus saving me the trouble of making the attempt (which is what a kind editor recently said about my own work). Almost everything I write is inspired by Calvino in some way or other... For 40K I have also started a series of interviews with important modern writers. Bruce Sterling was first on my list. At the moment I am interviewing another enormously clever and innovative writer, Paul Di Filippo. That interview will be in two parts. Part one is already available here. 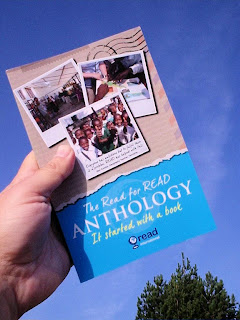 I have just received a copy of the anthology recently published by the charity READ International. It's a nice looking paperback that features the winning entries of the Read for READ Short Story Competition and it was launched at the British Library in London just over two weeks ago. The winners are Kate Baggott, Kristen Bailey, Charlotte Mary Ingram and Eleanor O'Rorke and the general standard of the final shortlist was clearly high, for the winning stories are all extremely well written. The anthology also includes stories by three guest writers, and I'm pleased to say that I am one of those.

Two of my stories were chosen; one, 'The Defining Moment', was written especially for this book and is about books; the other, 'The Mice Will Play', dates from 2001 and is one of my many cat stories. Yes, I have written plenty of cat stories in my time, but I don't dabble with that subgenre now. If one writes too many cat stories, people start to gossip... I have absolutely no idea if this anthology is commercially available or not. There doesn't seem any way of getting hold of it from the Read International website, nor is there a price anywhere on the book itself. But I don't think it's a freebie. 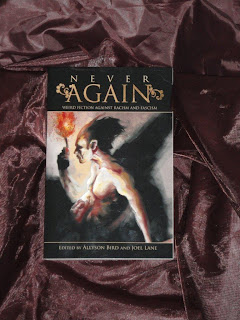 A month or so ago, a charity anthology was published with the theme of ‘anti-Fascism’. It’s a big theme, almost certainly too ambitious for any anthology to deal with properly or even in part. Also there’s bound to be a certain lack of clarity as to what fascism constitutes; and how can a worthwhile opposition be mounted against something that lacks strict definition? And yet... The theme of Never Again is still one of the most important of any anthology that has come to my attention in recent years. I believe that one of its editors, Joel Lane, has stated that genre fiction is among the most reactionary of all kinds of fiction, and I'm sure he's right in that assessment. But why is genre fiction so reactionary? 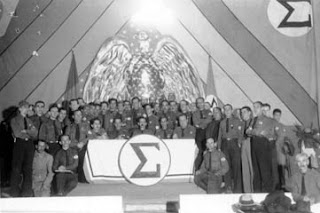 The ultimate problem, I fear, is that a form of 'fascism' (with a lowercase ‘f’) is a basic part of human nature. I suspect that a form of 'socialism' is also a basic part of human nature but I conclude that the fascist part is stronger and more elemental than the socialist part. So the first step in opposing fascism requires an effort of conscious will against our own dark emotional drives; and this fight must take place before the greater outer struggle can commence. I am in constant struggle with my own emotions and urges. True morality consists in using your reason to overrule your emotions when your emotions are inappropriate -- an extremely difficult task that causes angst. Without angst any moral decision isn't really moral. The struggle is internal first, external later. For me it means overcoming my own hotheadedness and impetuosity. 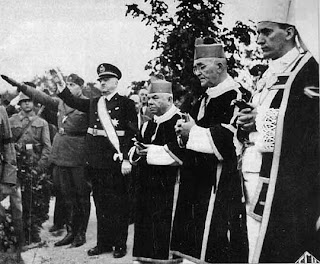 We need to ask: what good will such an anthology as Never Again do? What effect will it have? Will it convert any readers with fascist tendencies to a more tolerant outlook? Very unlikely. So what is the point of it? And what is the point of writers saying they they "support" the cause of this book? My own view is that the main good that will come of this anthology is that the editors, contributors and readers will have “nailed their colours to the mast” -- in other words made a clear unambiguous statement of intent (their opposition to fascism). That's not much of an achievement really, but it is something; and every such statement in the world of genre writing is important. 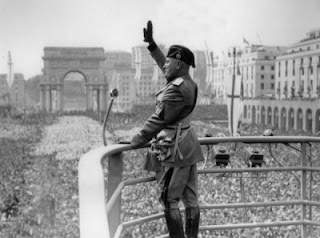 While this anthology was in the process of being compiled, a rather unpleasant incident occurred which has soured me towards certain corners of the writing world. A brace of small-time writers attempted, rather clumsily, to sabotage the book. Ask yourself why anyone would want to sabotage a project devoted to combating fascism? The obvious conclusion is that the writers in question must be fascists. That makes sense: it’s something I can understand. But no, it turned out that those writers wanted to sabotage the project because they hadn’t been invited to contribute to it. Imagine that! Unable to contribute to a cause they claimed to believe in, they tried to derail the cause, simply because of egotism and narcissism. That’s a rather absurd irony and needless to say I have decided to have nothing more to do with those responsible for such behaviour.

The above photograph of Never Again was sent to me by Allyson Bird, the other joint editor of the anthology. I have an eccentric rule that I like to use unique photographs of the books that I try to promote, rather than the publisher’s own images. I don’t know why I invented that rule for myself but I intend to stick to it. Never Again is published by Gray Friar Press and features 23 stories by such authors as Ramsey Campbell, Joe R. Landsdale, Stephen Volk, Nina Allan and Gary McMahon. My own story ‘Rediffusion’ is also a part of the mix. All profits from sales go to The Sophie Lancaster Foundation.

I talk about some of my favourite anti-fascist stories in more detail here. 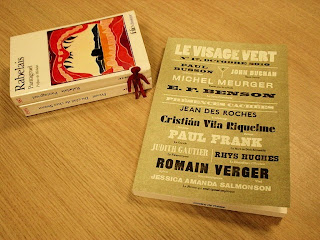 My story 'La Déconfiture d'Hypnos' has just been published in Le Visage Vert #17, a French anthology that includes fiction by John Buchan and E.F. Benson. The Buchan text is from his linked story collection, The Runagates Club, one of his best books in my view, and one of the finest examples of the 'Clubhouse Tale' subgenre. I am overjoyed to be published in French again! I'm especially pleased that I was given the opportunity to illustrate my own story after the commissioned artist failed to produce anything. I created a montage photo, something I have been doing a lot lately. And here's the result. 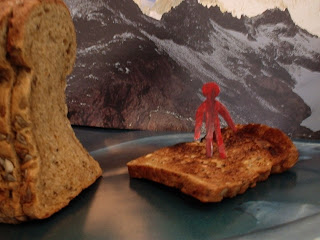 The picture shows the main character Florian on a raft of toast. The English title of 'La Déconfiture d'Hypnos' is 'The Jam of Hypnos'. I wrote this story back in 2003 and it's one of my favourites. In my last entry I mentioned that I was working on a story called 'The Quims of Itapetinga', also one of my favourites. That story is finished now and has been added to my Brothel Creeper collection. So which of my own stories do I consider to be my very best? I have selected my own personal top ten, a list that can be found here.