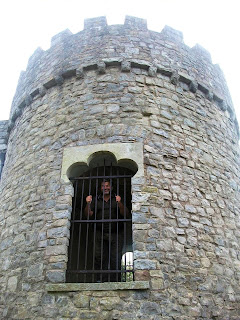 I went hiking and climbing on the weekend along the Vale of Glamorgan coast, a place I know well from my youth. The cliffs are remarkable and it's an amazing place to look for fossils. It was the first time I had been back to haunted Dunraven Castle for decades. Almost nothing remains of the actual buildings but the large gardens are still there.

Halfway on the excursion I tore a muscle in my right calf. I was attempting to climb a steep slope too quickly and with too heavy a pack. I distinctly heard a twang as if a rubber band had snapped. It was not unmusical. Needless to say, I wasn't able to walk very easily afterwards. Indeed I had to hobble seven or eight miles on an improvised driftwood crutch all the way to Llantwit Major to catch a train home. Three days later my leg still twinges but is getting better fast. I was lucky the injury didn't happen somewhere even more inconvenient, such as on a rockface. 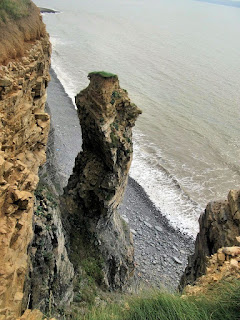 Such incidents remind me of the traditional sang-froid that British adventurers are supposed to demonstrate at all times, however adverse the conditions. I can manage convincing sang-froid for half a day, perhaps even a whole day; but how would I cope with the real rigours of a true daunting expedition? Not very well, I suspect. I will continue to admire the exploits of Tilman, Shipton, Thesiger, Doughty, Burton and other genuinely rugged men from a distance, several distances in fact: those of time, location, endurance and spirit. But even playing at heroics is better than sitting in a soft chair and turning mouldy, I feel.

Of course one does have to sit in a chair to get some writing done, unless one stands like Nabokov did... Anyway, I have been dreading this moment for decades... Yesterday morning I finished my 665th story, which means that the next one will be number 666!!! I'm going to crack on with it immediately to get it over with. Not that I'm superstitious or anything but... Story #666 will be about two climbers who can't go climbing outdoors because it's raining (Wales), so they decide to do some indoor climbing instead; inevitably they get stranded on the highest shelf of their kitchen and have to bivouac with the tins of beans while awaiting rescue. It's going to be called 'Left on the Shelf'. 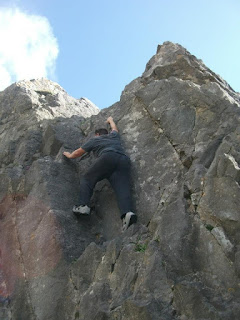 I've never been very good at social climbing. I've never been much good at real climbing either, for that matter, but I love it, even at my current low-level of ability. Yesterday I went to Three Cliffs Bay in Gower and climbed the eponymous cliffs from the beach. It might be a cliché, but when I'm climbing I'm genuinely "in the moment", living completely in the present, without the weight of the past or future on my mind. It's a sort of temporary eternity, if you credit Japanese mystics and Wittgenstein, and I do. The petty concerns of ground level are not only left behind but wiped away forever; they might shimmer back into existence later, but on the rockface itself they not only no longer exist, but never existed. That's a clumsy way of putting it; but that's how it feels. I dare say that climbers better than me (almost every other climber) could put it into better words than that. 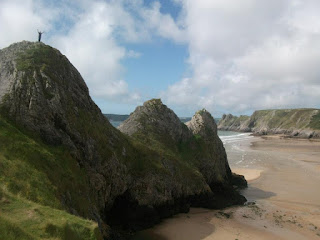 Getting back into climbing after a pause of more than ten years is the best thing I have done for ages. The last big climbs I did were Giewont, Rysy and Gerlach in the Tatras back in 1999. I did a few easy routes in Sardinia the following year in the Gennargentu range. Then I stopped. I'm clumsy, heavy and lazy. Too bad for me! Anyway, none of this matters: I'm enjoying it again and it's getting me into shape faster than running or cycling. It is affecting my thinking in other ways too. When I played a lot of chess I started seeing potential chess moves everywhere; so that a shadow, a fallen leaf and a discarded glove lying on the ground might look to me like a chess problem. Now I'm seeing routes up the sides of buildings, walls, rooms full of furniture and climbing everything with my eyes. I'm also reading climbing books again. Expect climbing to appear in the next short stories I write! Incidentally, the funniest book I have ever read is a lampoon on accounts of mountaineering expeditions. The Ascent of Rum Doodle by W.E. Bowman is still my favourite comedy. Why doesn't someone adapt it for the radio? Maybe I should lobby someone at the BBC about this. Why not?

In recent days I have been filled with an urge to write an OuLiPo novel. The last thing I need at this stage is to add yet another project to the list of projects I'm working on, but clearly it wants to be written. There's no point trying to resist an urge that feels so inevitable and apt!

Anyway, I already have a title for the novel, Comfy Rascals, and it will be a showcase of OuLiPo techniques, some standard, some devised by myself. I have just planned a section involving word ladders, which is a type of puzzle that seems ideally suited to the logical and linguistic constraints that are the essential basis of all OuLiPo projects. For instance, plot development in most fictional stories relies on the logic of everyday causality, but I intend to use the logic of word association instead, so the characters in this section of the book might encounter the following objects or activities in a strict order imposed by the rules of word ladder construction: Games, Gapes, Capes, Copes, Cores, Corps, Coops, Crops, Cross, Cress, Chess. Constraints like this serve to force the mind to think laterally and break the tendency of an author to rely on familiar patterns when devising a plot.

I know that writing Comfy Rascals is going to be very challenging. I also know it's going to be great fun! The third thing I know is that it's going to be extremely difficult to sell once it's completed. But that doesn't matter. I'm in love with OuLiPo and what price can be put on that?

The Truth has Arrived! 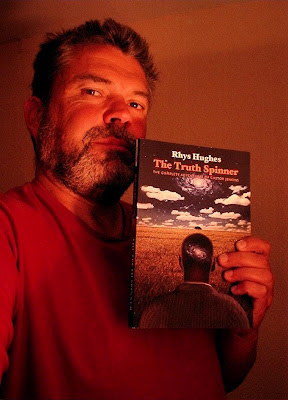 Two days ago I received a copy of my book The Truth Spinner through the post and I'm delighted by the way it looks. It's my 22nd book but I'm just as excited as when I saw my very first book seventeen years ago! Well, maybe not quite that excited, but the unadulterated childlike joy hasn't worn off for me, not yet, not yet...

I really like the design and the fact that the print is big, which means that readers won't have to squint to read it, unlike some of my earlier books.

The Truth Spinner is the first to be published of the five best books I have written (in my view anyway). The next will hopefully be out in September or October; and the other three sometime after that, maybe in 2013... Our best work is always ahead of us, never behind!!

I have added this title to my Aardvark Caesar site. The Truth Spinner features 18 linked stories collected into three sections, and as I've said before I think it's the best introduction to my work so far. But ultimately that's not for me to judge, of course. It's currently available from Amazon, Barnes & Noble and many other retailers, or direct from the publisher, Wildside Press. 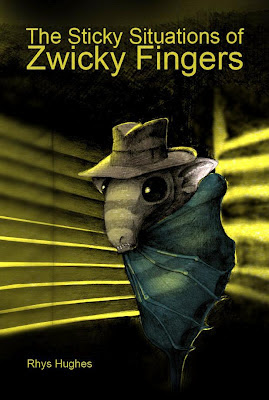 My latest ebook is now available. This is my 10th self-published ebook. I always said there would be twelve in total and I still think that's a neat number. The character of Zwicky Fingers came from nowhere. He's a giant fruit bat detective with some dragon, harpy and human genes; and he is often consulted by the police when they need help solving paradoxical, absurdist or impossible crimes.

For more details or to purchase this ebook, please look at the relevant webpage on Smashwords or on Amazon. The excellent cover is by the artist Chris Harrendence. The book consists of ten tales (or 'cases'), one for each finger of a strange hand (or for all the fingers of two normal hands), and features such dastardly villains as Mr Hyde and Dr Seek, the Sock Camels, the Haggler of Affection, Mungo Trumpet, Tockless Slockley the nose thief, and many others...