I have almost finished writing The Further Fangs of Suet Pudding. For some reason, I find writing about the apeman test pilot Stringent Strange very easy. The ideas come without asking, cascades of them, and the prose races along like some sort of experimental airspeed-record-breaking plane, perhaps the Supermarine S.6B with its Rolls-Royce 2,300 hp engine... Anyway this new novella will only be available for free to readers who buy my novel The Abnormalities of Stringent Strange from Meteor House and if you want to actually be a character in the story, you only have until Friday to buy a 'deleted scene' (with part of the proceeds going to the Animal Aid charity). Thanks!

Keep Kharms and be an Absurdist 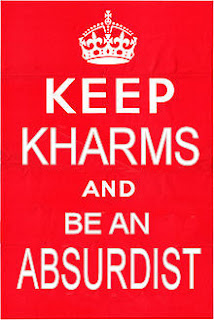 I have mentioned that I am editing the next issue of the fiction magazine Sein und Werden. The guidelines can be found in an earlier post below (October 5th). One big thing I have learned as a guest editor for this publication is this: most people who submit stories don't read guidelines. It's not so much that they don't read them properly; they don't read them at all. I asked for ironic, whimsical, absurdist comedies less than 1000 words, specifically stories with a European flavour (i.e. the work of Kafka, Calvino, Lem, Čapek, Nesvadba, Hašek, Babel, Vian, etc). But I received mostly conventional science fiction or fantasy stories averaging 3500 words in length.

A few noble writers did follow the guidelines and to them I am eternally grateful! However, I have accepted some of the stories that weren't what I was looking for, because they are rather good stories. So I have arranged the following deal with Rachel Kendall, boss of the publication: a free ebook will be produced in tandem with the print issue; and the ebook will be much longer and will feature all the stories I am sent that I like but which aren't absurdist comedies...

It seems that the next issue of Sein und Werden is in danger of losing the right to its title: The Ironic Fantastic! In order to get it back on track, I've decided to make the final third of the magazine a 'tribute section' to the great Russian absurdist Daniil Kharms. I want stories in the style of Kharms! And if you don't know what that means, check out this website for clues. Kharms' work might seem too brief, superficial, simplistic, on first reading, but it's not. It's about time, space, reality, perception... I wrote my own Kharms pastiche last year. If you want to help celebrate this unjustly neglected writer, please email your Kharms-style tales to: rhysaurus (at) hotmail.com. Thanks! 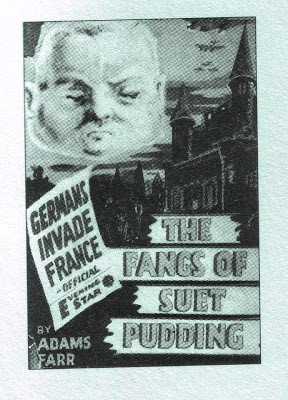 Back in 1944, a very obscure writer by the name of Adams Farr published a very obscure book with a very peculiar title. The Fangs of Suet Pudding is either a wartime thriller or a screwball comedy, depending on how seriously you take the plot, which involves the invention of the most powerful bomb in the world, car chases, kidnappings, disguises, innumerable narrow escapes and evil personified, namely one Carl Vipoering, a "violet-scented jelloid Nazi" who is none other than the 'Suet Pudding' of the title.

The original of this novel is now extremely hard to track down, but it has since been reprinted by a small-press. Anyway, I have decided to resurrect Suet Pudding and give him a new adventure; indeed, I have decided to pit his merciless abominable genius against the brawn and courage of my very own Stringent Strange, apeman test pilot...

So yes! Both Suet Pudding and Stringent Strange are coming back!!! The way it will work is as follows... I'm going to write a novelette entitled The Further Fangs of Suet Pudding and it will be issued as a free ebook to anyone who has already pre-ordered (or will pre-order) The Abnormalities of Stringent Strange. Furthermore, if you have bought (or do buy) a so-called 'deleted scene' then not only will you get the deleted scene you pay for, but you'll also appear as a character in this new novelette! This offer only lasts until the final day of November.

The Further Fangs of Suet Pudding will only be available to those who join the Stringent flight, so if you want it, or if you actually want to be in it, then check out the Meteor House website for ordering information.

Thanks! And remember: Heil Pudding! 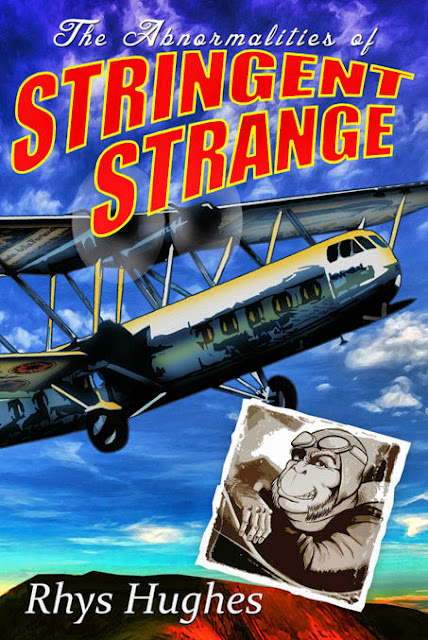 My best novel is available to pre-order... It's a signed limited-edition and you can even appear in your own 'deleted' scene for a few extra bucks, with a percentage of the proceeds going to charity. But I've mentioned this before. Clink on the Meteor House link for more details or if you want to buy the book.

Don't make a monkey out of Stringent Strange. He's an apeman! 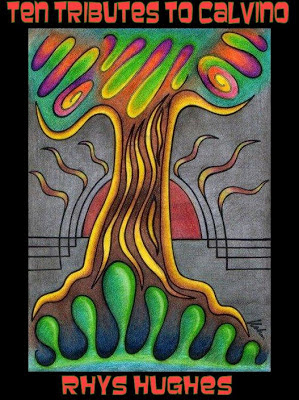 My latest ebook is a set of ten stories written as tributes to the great Italian author, Italo Calvino, who is certainly my favourite fiction writer. The contents include four stories that have never appeared anywhere else before. The other six have appeared at various times in various places, mainly in obscure anthologies.

Not included here is 'City of Blinks', a tribute story to Calvino that will appear next year in The Senile Pagodas, a big book of twenty tribute stories to fiction writers I admire. A complete list of the authors who get a tribute story in that book can be found here. I have written dozens of tribute stories to Calvino; and even when I'm not consciously trying to imitate him, I suspect that his influence on my work is profound and unmistakable.

Anyway, Ten Tributes to Calvino can be purchased for the fabulous sum of 99 cents from Smashwords here; or from Amazon for 77 pence here. The cover was done by the wonderful Brankica Bozinovska back in 2007 and is just one of her many luminous artworks.