The World is Turning

I'm updating my blog more often than usual because these are the last entries I'll ever make while I'm in my thirties... and in fact this one is the very last one!

But in some parts of the world my birthday has already come! The time is 13:30 where I currently am, which means that in the far east of Siberia and on certain Pacific islands I am already 40 years old!

Conversely, when I turn 40 here, I'll still be in my thirties throughout the American continent. So if I make a telephone call to the USA at that point, I'll have two voices at the same time -- the voice that emerges from the telephone will be younger and therefore slightly more attractive, slightly more imbued with hope and enthusiasm, and less likely to miss out on opportunities, than my older voice at home!

My 40 year old voice will be in a position to give some wise advice to my younger self, to the voice of mine that is still thirty-something. But what advice can a voice give to itself? The voice receiving the advice will be aware of the advice at the same time it is being uttered -- which makes it less akin to advice and more like pre-established harmony. Something to do with 'windowless monads' apparently. See Malebranche and Leibniz for more details.

Bye! Take care. I'll see you again when I'm in my forties...

Playing the Guitar to a Baby! 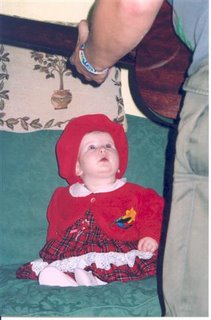 I was delighted to meet up with my friend Carly again at a Farmer's Produce Market on the weekend. Carly's baby is now walking (very unsteadily) and has gained a certain proficiency in music. I wish that Huw and Manuela had stayed just five minutes longer and then I could have introduced their own little baby, Morgan, to Carly's bigger baby, Shayli. As it happened, I was able to introduce little Shayli to Joseph, the little baby of Elena and Tim 'Sunblush' Prosser, a man whose conversational manner was memorably described by Stuart Ross (of the Frictionless Man) as a "tannoy manned by a flying pumpkin head with the mannerisms of Bruce Forsyth!"

The last time I met Carly and Shayli was before the summer... Playing the guitar to a baby is easy because they don't know what a tune is supposed to sound like. Even a really bad musician such as myself can get away with playing musical instruments to babies!

It's a sobering thought to think that one day those little babies will be as old as I am now -- living through the final week of their thirties! But I need a sobering thought or two at the moment, to negate the amount of red wine I drank at my book launch... And talking about books, I've just finished writing my latest, The Less Lonely Planet, and I've even drawn an imaginary map for it. I'm delighted that the last book of my thirties is one that is so inventive and so resolutely silly!

My next birthday is less than a week away. But right now I'm still in my thirties! I need to make the most of that while I still can!

Last Wednesday, at precisely the same time my work was being performed in a cafe in Helsinki, I took part in a poetry slam here in Swansea, which I won (Well I came joint first with two other people)... This means I have to take part in the 'semi finals' -- about two weeks from now.

As for my book launch on Friday night... There are various ways to launch various objects -- trebuchets, mangonels, ballistas, etc -- but my book was launched like a surfboard on a wave of red wine... I would like to thank everybody who came because they wanted to, and everybody else who came because they had to, including Dave Woolley, events organiser (I don't know his official title) for the Dylan Thomas Centre. Mr Woolley has his own book launch in the same building on September 21st...

I think that I've just had a short novel published in France (in French). I'll report on this in more detail when I know for sure!

At the Risk of Repeating...

I have recently become aware of how often I repeat myself on this blog. The same information about my literary 'achievements' keeps appearing post after post: it's very offputting and certainly not an insouciant way to behave, indeed one might describe it as souciant, if such a word exists!

I therefore must bow my head in adequate shame to announce yet again that the launch of At the Molehills of Madness, my latest book, is taking place this coming Friday (September 15th). The venue is the Dylan Thomas Centre in Swansea. The launch begins at 7:00 PM and there will be free wine, readings; and music from the rather wonderful Frictionless Man.

I am hoping to make this event slightly different from the usual booklaunch. I have invited a number of people from radically different backgrounds in the hope of encouraging some form of cross-fertilisation in the local arts scene. I plan to use my time on stage in front of the microphone to plug various talented individuals I am pleased to know personally, including the artist Helena Eflerova, musicians Stuart Ross and Monica Konggaard, the writer Steve Redwood and many others...

The extremely talented Mike O'Driscoll will be there too. O'Driscoll is one of the finest writers currently living and working in Wales and he will have copies of his first book The Unbecoming to sell and sign...