My farming life came to a premature end this week when I was castigated because I finished work half an hour early to take a walk in the mountains. I decided to leave the following morning rather than accept the conditions the bosses wanted to impose. The word 'exploitation' has been ringing in my ears since I first went to the Finca Rio Pradillo. I left soundlessly very early on Wednesday, before even the roosters were up, and the walk back to Cercedilla and freedom was one of the most pleasant parts of the whole experience!

Ah well, we live and learn! Now I'm back in Madrid and debating what to do next, apart from writing stories, of course. I always write stories, wherever I am and whatever else I'm doing! I've started a new cycle of absurdist tales involving a character called 'Don Cosquillas', using ideas that came to me in the mountains, and I'm very pleased with the results so far, but it's only light whimsical stuff before I get down to more serious projects.

I'm not used to getting paid for stories on the web. But I got paid for this. A pleasant surprise! Money is the eternal question... Rosa and I have been debating the possibility of briefly going to Africa for a few weeks in January, probably to Algeria or Senegal. I'm very keen, but need to earn more money to make such a trip feasible. So: more stories and more sales! I've sold plenty of work to anthologies recently and need to continue doing so!

Finca, therefore I am! 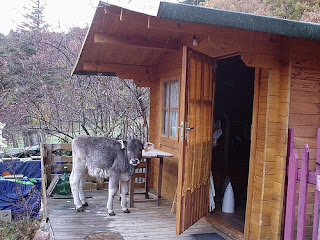 If I could remember how it went, I might now be humming ‘Down on the Farm’ by Camel, from their seminal 1978 album, Breathless. That’s because it’s thematic. I’ve been living and working on the Finca Rio Pradillo since last Saturday and it has been rather a difficult adjustment to go from my former indolent existence to the tough life of a farmhand. Work begins at 7:00 AM (before sunrise) and finishes at 7:00 PM (after sunset). I’ve milked cows, tried my hand at carpentry, helped to make bread and cakes, and moved more heavy loads from one place to another than I care to remember.

I have a quaint wooden casita to sleep in (a shed) and it’s cold at night. It’s cold during the day too, and rather damp, but when the sky does clear the view is lovely. In the day: forested mountains in late autumn. At night: amazingly bright stars. Last night I watched Orion rise over one of the peaks while the farm was bathed in soft moonlight. My chief companions here are Sebastian from Ecuador and Hector from Segovia. Both are friendly and interesting people. Yesterday I chased a calf from the porch of my casita. It was stamping on the boards for no obvious reason (see picture). Rabbits run around everywhere.

I have a free day on Saturday, so I’m going back to Madrid to see Rosa. I may even laze around a bit!

It's too Farm Fetched!

Tomorrow I’m moving to an organic farm north of Madrid, in the mountains of the Sierra de Guadarrama. The name of the farm is Rio Pradillo and it can be found a few kilometres outside the pretty village of Cercedilla. Farm life means less internet access for me and I anticipate delays in answering e-mails and dealing with other computer related business. Apologies in advance to everyone concerned! I don’t like being out of the loop but I am looking forward to a rural existence again! Crisp frosty mornings, sunsets over the peaks, horses, cheese, bread. That’s a list, not a progressive sequence! The bridge in this photo is the Puente de Toledo, just a few minutes walk from the house where I’m currently living with my girlfriend. Two centuries ago the Madrid authorities decided they wanted a grand bridge befitting the capital city of Spain. Unfortunately the main river that flows through Madrid is little more than a trickle and so this overlarge bridge mostly crosses dry land. It’s something of a joke among the local residents and I feel rather sorry for the poor puente, in the same way I might feel sorry for a very big shoe on a very small foot.

The reason I mention this is because I have written a story concerning the Puente de Toledo and what happens when it gets lonely and goes in search of a girlfriend (i.e. a female bridge). Tomorrow the excellent Tartarus Press publish their new Strange Tales anthology and my story, ‘The Concise Picaresque Adventures of the Wanderlust Bridge’, is included therein. This is the third such Tartarus anthology and I’m happy to report I’ve been included in all three. Tartarus produce amazing books and I’m sure this one will be no less luxuriant and fabulous!
I have numerous stories due out in many anthologies in the coming months. More news on each item as it appears... Since returning from Seville I have returned to writing with excessive zeal. In just three days I wrote three new stories, completing a new satiric cycle, ‘Mr Gum, the Creative Writing Tutor’, and I’m currently finishing another three tales before getting to grips with my Bedsteads novel(la).The soundtrack to all this writing activity comes courtesy of regular visits to Madrid clubs for live music!
# posted by Rhys Hughes @ 4:29 PM 0 Comments

The Blabber of Seville 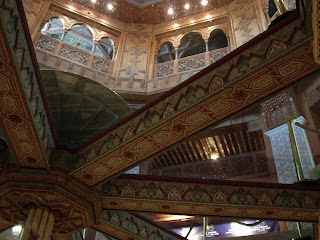 "Seville is a pleasant city, famous for oranges and women."
-- Lord Byron

"I ain't so well known." -- A typical orange from Seville

The first time I went to Seville was two years ago, on my way back from Morocco. It's a very beautiful city, almost dreamily 'Spanish', and I was pleased to go again for Hispacon this year because I realised there was much I hadn't yet seen. As it turns out there is still much I haven't seen, partly because Seville is a tangle of narrow alleys and one might live there for years without exploring every fascinating nook and curious cranny.

My publisher, Luís Prado, paid for my journey, and thanks to the Hispacon organisers I stayed for free in a very comfortable 4 star hotel in the Barrio Macarena, near the old city walls. On my first night I went for a walk and encountered a religious procession somewhere near the church of San Marcos, with lots of incense, drumming and a huge image of the Virgin carried by sweating costaleros dressed in archaic garb. The atmosphere was very special.

Hispacon itself was held on the south side of the river, in the former pavilion erected by the Moroccan government during Expo 92. Now renamed the Fundación Tres Culturas, it's an incredible venue for a conference. Sadly, many of the presentations and talks I couldn't understand because they were in Spanish. My own presentation was conducted with the aid of translators and headphones, a system that worked surprisingly smoothly. I had worried that I might blabber instead of speak coherently, but everything went extremely well.

Some photos of the event can be viewed here. Because my own flickr account has filled up more rapidly than expected, I've started a new one. When I returned to Madrid, I had to make a decision about when to return to Wales. Originally I was going to fly back today (November 10) but now I prefer to postpone my return for a month or two. I am currently looking for more farm work: and I think I might have found some.

Finally, here's a quick plug for a person by the name of Zoe Chandler...