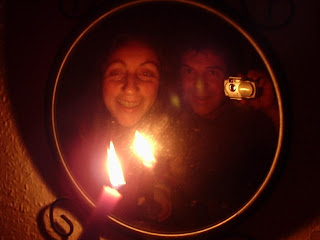 Another year has come to an end. I began 2008 in a farmhouse in Cantabria and I'm ending it in Swansea... In between there was Africa, Aragon, Portugal and Pembrokeshire... I had three books published including my 'jinxed' Engelbrecht book (the first novel I ever wrote) and I completed a new novel ready for publication next year... I wrote a total of 27 new stories and started two or three new story cycles... As for reading, I discovered two authors who impressed me to a greater degree than usual and both have the same initials. One was Bruce Chatwin, the other is this fellow...

So much for all that. The best thing about 2008 was Adele. We spent as much time outdoors as possible, generally on the beach. We were robbed by a fox. We played frisbee and cricket, slept under the stars, ran into the sea (and ran out again) and did far too many things together to mention. Nobody has ever made me laugh so much. I'm looking forward to spending all of 2009 with her. In the meantime, Happy New Year to you all! 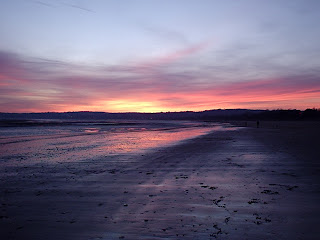 I have been playing around with photographic software. Clearer versions of the pictures in my last blog entry have been created but they can't be found here. In the clearer photos, Paul's gold shoes look more expensive. In the week since the show, Adele and I have been walking on the beach a lot in our much less fancy shoes, hunting for sunsets. Found a few too -- like this one... Not bad for Wales in winter! 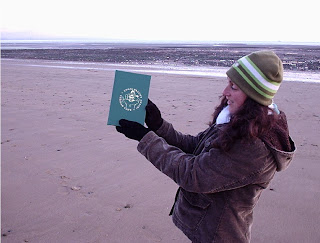 Meanwhile Bookspot Central are running a competition in which the prize is a copy of my latest book, Engelbrecht Again! Not sure what you have to do to enter but I think the closing date is December 18th, so not much time left! This photo shows Adele and the prize. I would rather win the girl than the book if I was you. But the book's all you get. Sorry. Life is tough. 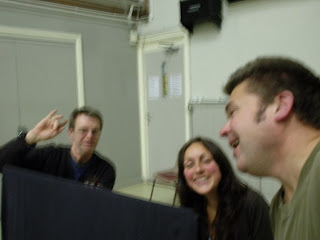 Months ago I promised the Asociación Latinoamericana de Swansea (yes there is such a thing!) that I would do a reading for their Christmas party on December 6th... Not just a reading but a multimedia show utilising live music and pictures! The idea was that I would write background music and play it myself, while projecting cartoons on a giant screen behind me, reciting my story at the same time. 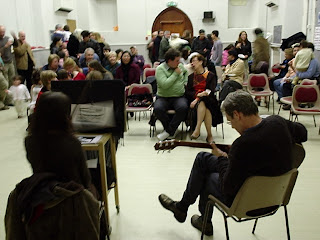 Naturally I left the preparations until the last minute and so Saturday was a busy day, rushing around to prepare for the evening performance. By this time I still hadn't written a single note of music and didn't even have an instrument to hand. Nor was a computer available for the show, so my planned powerpoint presentation was scuppered. Luckily Adele came up with a brilliant low-tech alternative -- printed pictures dangled from the end of an improvised fishing rod. 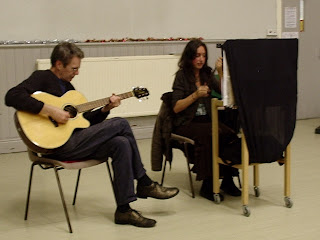 To make the illusion more realistic, she hid on stage behind a hastily constructed screen (a flattened cardboard box covered with a black curtain) and dangled the pictures with supreme efficiency and precision and almost no wobbling. I was extremely grateful for her cool professionalism! As for the music, the awesome Paul Battenbough saved the day with his smooth and bittersweet picking and strumming. We did no rehearsing before the show -- he merely relied on his natural talent as a superb musician to set the musical mood as we went along. 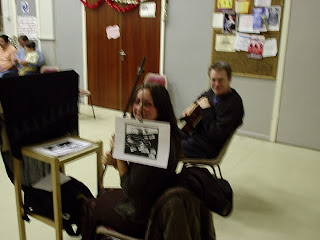 The story I read was actually two linked stories -- 'False Dawn of Parrots' and 'The Gala of Implausible Songs' -- both of them part of my Mermaid Variations project, both already published in Portuguese in my Sereia book and published in English in issues #7 and #17 of Postscripts. The cartoons I used were drawn by Anthony Lewis (as opposed to those drawn for the Portuguese book by Paulo Barros). The slightly misleading title of the show was Borges and Bossa Nova. My enormous gratitude again to Adele and Paul. We earned £25 for the show, split three ways.

The Daubs of Perception 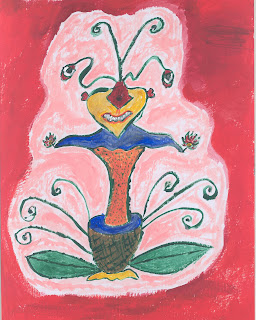 Christmas is coming, unfortunately. I avoid celebrating it as much as possible every year. Scrooge is one of my heroes (the unreformed Scrooge, not the later version). I despise decorations, fairy lights, false joy, flaming puddings, sherry in the afternoons and spending money. This year I will probably go north for the dreaded Xmas Day instead of south. Strange? Not really. Adele comes from Lancashire, so we will travel there to visit her family. If snow falls I won't build a snowman but I might build a snow-walrus, as I did way back in 1991, a variation I'm still pleased with. 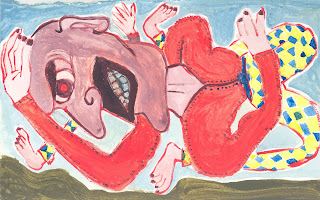 Close your eyes quickly! Here are my two most recent paintings. Too late! The titles of these monstrosities are as follows:
1. Boris Lovetrap
2. The Yoga Lesson
Not having painted anything for many weeks it seems I've lost my gift. Luckily I never had a gift in the first place, so there's nothing to lose. Marvellous. Don't like giving gifts, don't like receiving them. Suet is a mean trick. Crackers, worthless.