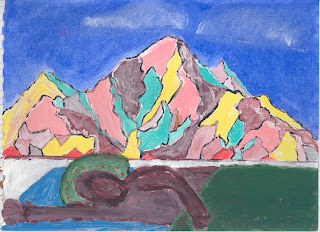 This painting shows a retired yeti enjoying a civilised nap in his great external bedroom. The yeti is none other than MeMeMeMeMe U, one of the monsters who oppose the forces of good in my Twisthorn Bellow novel. MeMeMeMeMe U made his first appearance in my short story 'Hell Toupée' (not yet published) but I liked him enough to include him in my novel also. He enters Britain without a visa when the block of ice that entombs him is shipped back from Tibet to the Imperial Ice Museum in London. Then global warming thaws him out and all hairy hell breaks loose! After many adventures he returns to a secret valley in Tibet and grows old gracefully, losing all his hair, which is how he is depicted here. Coincidentally, a hairless yeti closely resembles a badly painted brown man!

This painting was executed over a period of many months. I did the mountains last December, then hid the unsatisfactory result until the yeti grew sleepy enough to include in the foreground, a few days ago. Nicholas Roerich spit your heart in (the opposite of eat your heart out!)

An exclusive extract from Twisthorn Bellow can be found by clicking on this link. It's a passage from the final chapter. Hope you enjoy...

Inner Wind of the Blog

When I was seventeen I wrote a short story called 'Southbound Satin' about a man and woman stranded in the middle of the ocean who decide to build a raft even though they have no construction materials to hand apart from each other... I lost that story a few years later (all the fiction I wrote between the ages of 14 and 22 has been lost) but I always knew that one day I would attempt a rewrite. I kept putting that duty off, though! Prompted by a story request from the editor Danel Olsen, I finally took the plunge and produced a second 'Southbound Satin' a quarter of a century after writing the original... I have rewritten many of my lost stories and the rewrites are usually an improvement and this is certainly the case with 'Southbound Satin'. Without giving too much away I can say that the initial solution to the raft problem is saucy rather than nasty... 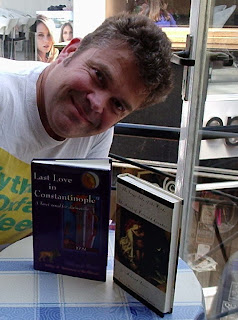 What makes this experience even better for me is that my story going to appear in an anthology with Milorad Pavić, one of my great literary heroes! I have enjoyed and admired the work of Pavić ever since I read Dictionary of the Khazars back in the '90s. For a long time after that, Pavić was my favourite writer and maybe I tried too hard to write like him. His extreme inventiveness, stunningly strange metaphors, bizarre characters and non-linear plots were (and still are) exactly to my taste. This photo shows me with two of his novels, Last Love in Constantinople and The Inner Side of the Wind. I am especially fond of the latter, which contains two engaging narratives printed dos-à-dos (back to back) that are independent but meet in the middle. You read any one, flip the book over and read the other. Marvellous! 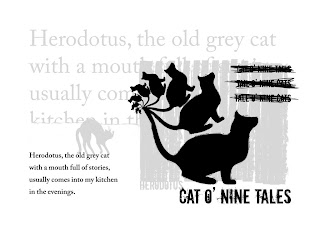 My first book Worming the Harpy was published by Tartarus Press back in 1995 when I was 29 years old. The print run was very small and the book was edited in a way I wasn't entirely happy with. Ever since then, I have wanted a cheaper paperback version to be made available to a wider public, and in the shape of Prime Books I thought I had found a publisher willing to take the project on. Sean Wallace of Prime Books agreed to issue a cheap paperback Harpy in 2005 as a way of marking the 10 year anniversary of its original launch. John Clute wrote an Introduction for the second edition, and E.F. Bleiler wrote an Afterword. Luís Rodrigues was hired to design the cover and internal layout.
I was looking forward to the release of this second edition with especial delight because the text had been restored to its original shape, with deleted scenes reinserted and other errors corrected. However, as the years slowly passed I began to suspect that Prime Books had no real intention of publishing the book. My emails to Sean Wallace went unanswered. Four years after its scheduled relaunch failed to materialise, I have finally heard back from him with the news that he has pulled the plug on the second edition. So the rights have now fully reverted to me. I intend to seek another publisher for this project but I have no idea how long it will take before I find one. My apologies to any reader who was awaiting the book, and also to John Clute, Everett Bleiler and Luís Rodrigues for this setback.

(2) Horn Twisted...
However, bad news is often counterbalanced by good, and so I now take great delight in announcing the official launch today of the publishing company that intends to issue my novel Twisthorn Bellow in September. Atomic Fez was set up by the Canadian fellow Ian Alexander Martin, former sachem-and-sheik of Humdrumming Ltd, publishers of my Less Lonely Planet collection (aptly enough, Atomic Fez also plan to being out a second edition of that volume, an expanded version, sometime next year). I am particularly satisfied with how extreme my novel is in terms of multilayered absurdity and twisted logic. Is it the maddest thing I've ever written? Yes it is. 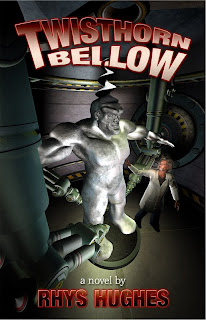 The cover of Twisthorn Bellow was rendered by Steve Upham, resident genius of Screaming Dreams, who published my Postmodern Mariner last summer. Steve is a superb graphic artist and his speed and efficiency are already becoming legendary. His vision of my golem character is superior to my own and conveys a sense of immense brooding power. The point of Twisthorn Bellow, as I'm sure I've said before, is that it's a spoof of the genre of the dubious superhero but also a serious contribution to it. Writing a Hellboy story last year provided the spark for the main concept. Cult pulp author Philip José Farmer was my other main inspiration. My joy at the way everything has turned out is quite improper and I intend to plug this mother like a sink. Strange how we plug sinks to start them filling, but plug books to stop them sinking...
# posted by Rhys Hughes @ 10:22 AM 3 Comments

I have a bicycle again. This means I can get fit enough for a big bicycle adventure later in the year. Maybe a two-wheeled tour of Sardinia in September, who knows? With a humble nod in the direction of Che Guevara, the name of my bicycle is 'The Less Than Mighty One'. At the moment it's a rather boring black colour, so I'll probably paint it blue, green, yellow, orange and gold. All bicycles should have absurd names, in my view. Don Cosquillas, hero of my unfinished novel The Pilgrim's Regress, unsurprisingly shares this view. During his political phase his various bicycles were called 'A Squeaking Class Hero', 'The Bicycle Potemkin', 'How Clean Was My Velocipede', 'The Smelly Saddled Philanthropist' and 'The Stakhanovite Lazybones’...

At some point I really ought to return to that novel and finish it. I have too many partly completed projects, dozens of them, and it's getting confusing. I keep forgetting how certain stories or sequences are supposed to end. It's a chaotic and frustrating working method I don't recommend! One project at a time is the ideal I always strive for and never attain... In the meanwhile, with the demise of the WoW website, the online stories it featured have been archived at The Future Fire. These archived stories include the first five 'chapters' of The Pilgrim's Regress, all of them written in a very cold wooden cabin in the mountains near Segovia back in the winter of 2007. Brrr!