I have just finished writing my 703rd tale. This one is about a giant air bubble under the ocean where people go when they are tired of life on the surface. Shame the submarine that takes them there is a bit too pointy... It is called 'The Bubble Bursts'... All well and good, but the fact of the matter is that I have written dozens of tales that aren't included in my official list of written stories. Why did I leave them out? I don't have a good answer. Some of them just seemed too short to be valid stories; but in fact I love flash fiction and a story that's only half a page long can be just as mighty as a novel. 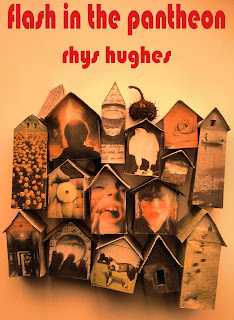 I have therefore decided to collect many or most of these non-canonical stories together and write a framing device to contain them, and linking passages to connect them, so that there will be one new story made of many parts and those parts will be all those loose unlisted stories. It's a way of gathering my lost sheep back into the flock. The title of this new multi-part story will be 'The Floppiness of Mucky Puppet' and I have no idea why it will be called that. The words just jumped into my mind this morning and demanded to be used. I can't turn such a demand down. I will include it in my rewritten and expanded Flash in the Pantheon collection, which I hope will eventually become a proper book.

This means that the already existing ebook collection with that name will be coming down soon. You can still grab it before it vanishes! 101 flash fictions for only $2.99... Get it from Smashwords or Amazon now! 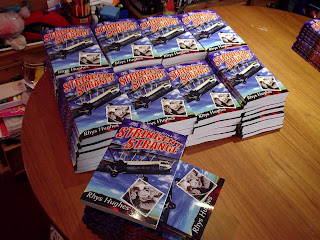 The Abnormalities of Stringent Strange has been published at last, three and a half years after I sat down and wrote it. My apologies to all those who pre-ordered it for the delays! This first print run is the signed limited edition and there are only 88 copies, each one given the name of one of the 88 official constellations. The trade paperback will follow.

So I went to London last week to meet up with Paul Spiteri, the British partner of the publishing firm Meteor House. Paul turned out to be a generous and delightful host. We sat in his implausibly large garden drinking coffee watching foxes and deer... I signed the print run and then we went into central London for the launch itself. 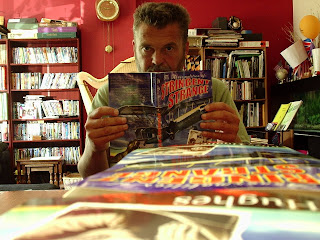 It wasn't really a launch, in other words a formal event with readings, etc, but an informal gathering of anyone who wanted to turn up. I chose the Princess Louise pub in High Holborn as a meeting place, because it was the only London pub whose name I could remember. As it happened, the last time I was there was back in 1998, and I had forgotten that it's one of the weirdest pubs imaginable.

There are many doors on the outside and inside too, and they all seem to lead to tiny little cubbyholes facing a section of bar, and it's possible to see other cubbyholes across this bar but not to reach them. To change cubbyholes you have leave and go back out and then back in... The place is more like a hive than a normal building. So it's not the obvious place to meet people you have never seen before... 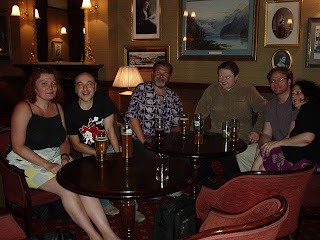 But the upstairs room was open and that is just a normal space and that's where we ended up, so it all turned out well... In fact this booklaunch was one of the more enjoyable ones. I guess that after 24 published books I've become a bit blasé about these things, and in fact I wasn't anticipating anything special, but it turned out to be great, and this was due entirely to the people I met. So a big THANKS to them...

I left London on Friday and returned to Swansea on a very slow bus (traffic!) and arrived just in time to pop along to the opening of the new Elysium Gallery. It was a fine show, one of the best local art shows I have been to in a long time. Very varied and a bit freaky. One of the artworks was a miniature personal disco, perfect for solo dancing. I was still on a high from the booklaunch so it seemed a good way to celebrate... 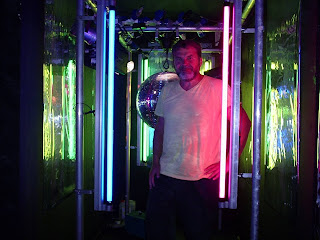 And now it's back to work I suppose. With luck I should be having another three or four books out in 2013, The Just Not So Stories and The Young Dictator and The Lunar Tickle and (maybe) The Senile Pagodas. There might be launches for the first three but probably not for the fourth. I will post updates on my blog the moment I know anything, of course....

Anyone who wants to buy a copy of The Abnormalities of Stringent Strange should do so directly from the publisher by visiting their website. I'm not sure when the trade paperback will be available but it shouldn't be too long a wait.

It feels good to finally launch Stringent... I just hope he remembers how to fly! 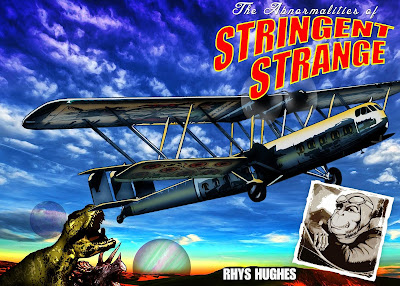 I am going to London today to sign copies of my new book The Abnormalities of Stringent Strange. Apologies to everyone who pre-ordered a copy and has had to wait ages already!

This edition is a signed limited one. The print run is only 88 copies and each one will be given the name of one of the 88 constellations. The limited edition will be followed by a trade paperback.

There will be a modest gathering on Wednesday evening to celebrate the event. No one will be pressurised into buying a book or anything else. I probably won't even do a reading unless you want me to, as it's a public space and I might get arrested for disturbing the peace.

The venue is: the Princess Louise, 208 High Holborn, WC1V 7BW, London, and I will be there from 7 PM until closing time on Wednesday 17th July... If you happen to be in the area come along and say "hello!"

Better the Devil You Know 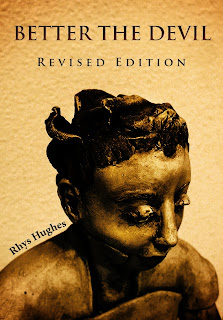 A couple of years ago a fake "publisher" by the name of Neil Jackson scammed me (and other writers) by commissioning chapbooks and ebooks from us, which he sold at a profit without passing any money back to his authors. Often he took the money from readers but never delivered an actual product. He pocketed the money and ran...

Anyway, the ebook I created for him was called Better the Devil and it sold quite well, but I received nothing at all. So I've finally decided to issue my own revised edition of the same ebook. Here it is; and this time every cent and penny goes to me, apart from the percentage that goes to Smashwords and the other percentage that goes in taxes... but hey, at least I get something!

100,000 words of fiction for $2.99 and a fabulous cover by the excellent Gonzalo Canedo... You can download it by clicking on this link to take you to the relevant Smashwords webpage.

Note: If you've already bought The Tellmenow Isitsöornot then you probably don't need this one as well, as some of the contents overlap. 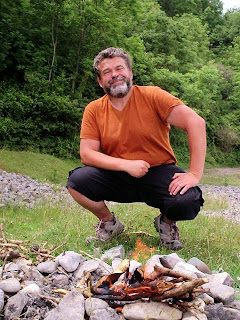 More outdoors activities. A picnic in Pwll Du (one of the nicest and most isolated beaches in the Gower) with my lovely friend Elena and an opportunity to attempt to light a fire with wet wood. It had rained heavily all the previous night, so the question was: could I do it? I often fancy myself as a bit of a Ray Mears and in fact he's one of my heroes, so I bore in mind the methods he teaches for lighting a successful fire, including laying a base of logs to keep the fire above the ground and create embers, splitting the lengths of wet wood and making a feather stick to get it going in the first place. I was inordinately chuffed with myself when it worked. Tea with lemon followed and for some reason food and drink tastes better when prepared on a camp fire than any other way. 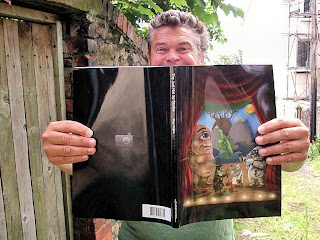 I returned to civilisation to find that the proof copy of my new collection The Just Not So Stories had arrived. For some reason it's massive. I don't mean massive in terms of the number of pages, but in sheer physical size. It could double up as a coffee table or windbreak... I'm assuming that the book when it is published won't be quite so large. It is much easier to proofread text that is so big, so I'm not complaining! This collection contains some of the best stories I have written in the past five or six years (in my opinion anyway), including 'The Blue Jewel Fruits', 'My Crow Nation', 'How to Make Enemies and Alienate People', 'The Leveller of Neptune', etc. The publisher is Exaggerated Press and I'll post more details here when the book is available to the reading public.