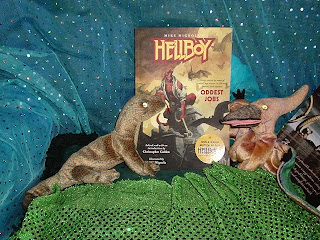 This is Oddest Jobs, the new anthology of Hellboy stories that contains my 'Feet of Sciron' tale. It also contains tales by Joe R Landsdale, China Miéville, Tad Williams and many others, each story nicely illustrated by the excellent artist Mike Mignola. I didn't know anything about Hellboy before the editor Christopher Golden asked me for a contribution. I haven't seen any of the films yet but I might do so now. The book in the photo is flanked by a pterodactyl and what is almost certainly a komodo dragon.

Learning about the Hellboy mythos has filled me with a desire to create something similar, but I must take special care that my inspiration isn't too direct. Hellboy is a good demon in the employ of an efficient government bureau that fights against supernatural evil, so my own hero has to be something other than a demon. I already know that he'll be a golem who falls into a vat of nitroglycerine before his clay has properly dried, turning him into a sentient stick of dynamite. I also know that his name will be Twisthorn Bellow. I don't know much else yet. 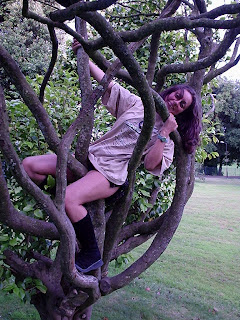 My Portuguese t-shirts came in the post and I like them very much. It's not every day I get asked to write a short story for an item of clothing. This particular story (as I may have mentioned before) is a mini-saga. This photo shows Adele modelling the t-shirt in a tree. More about Adele can be found here. I wrote many mini-sagas when I was younger but this is the only one that still exists.

I think -- but I'm not entirely sure -- that I've won a prize for the Spanish version of my short story 'Finding the Book of Sand'. Webpages like this have put the notion in my mind. However I haven't been directly notified of anything, which seems a bit odd. If I have won then it will be a rare event, as I tend to get passed over for awards, maybe because my work intimidates judges and voters.

The latest news about Steve Upham is that he seems to be on the road to recovery, thank goodness! Upham at 'em, is what I say! What else? Not much news really. The latest edition of the e-zine Serendipity features my 'Minotaur in Pamplona' story here. The new Hellboy anthology has just been published: more on that in my next post. It has stopped raining at long last!

It does exist, verily in truth it does, The Postmodern Mariner, and here it is. In this photo it stands atop fine works by some of my favourite writers, including Ballard, Calvino, Milorad Pavic, M. John Harrison, Brion Gysin, etc. How many others do you recognise? Is there a prize for whoever correctly identifies the most books on this shelf? I might have a copy of Mariner going spare, so the answer seems to be: yes there is! 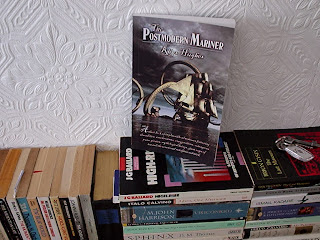 The publisher of Mariner is the redoubtable and mighty fine Steve Upham. I had an email from one of his friends a few days ago. It seems that Steve was rushed into hospital with heart problems last Monday. I knew that Steve had been feeling unwell for several months but I didn't realise the situation was so serious.
A recent update informs me that his condition has stabilised and that he might soon be on the road to recovery. So good luck to Steve and best wishes for a rapid improvment in his health!
What this means (among other things) is that there might be delays in obtaining my book for anyone who has ordered it. This also applies to any other book Steve has published. Steve's life is more important than any book, of course, but I was asked to make this announcement here, so I have. Steve will obviously be taking a break from work for quite some time, but maybe his publishing business will be up and running soon anyway. I heard a rumour that he has designated a proxy to take over. More information about that when I know for sure!
# posted by Rhys Hughes @ 12:00 PM 3 Comments 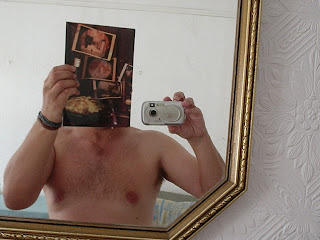 Hannah dropped off some of my possessions that have been loitering at her place in Waunarlwydd for longer than a year. I'm grateful to her for that. My possessions turned out to be mostly books. What a surprise! One of these books turned out to contain my only translation (so far) into Russian. I had forgotten about it. There's a dragon on the cover and it's an extremely well-produced book.

The second edition of The Smell of Telescopes wasn't one of those books: I already owned a copy. I like what Eibonvale Press have done to it. The cover features a blueberry pie among other things and all the stories are accompanied by interior illustrations. Nice! So far this book is the only one of my volumes to go beyond a first printing. I hope it won't be the last. It's possibly my favourite out of all the books I've written and seems to be the favourite of many readers too. Let's pretend the rest of this paragraph contains more self-publicising twaddle along similar lines, ok? 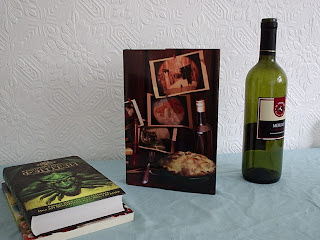 The Welsh weather has been too rotten lately to make outdoor activity comfortable. But tonight Adele and I plan to have a fire on the beach even if it rains. Quite how we'll manage such an absurd and impossible feat remains to be seen. But our inherent defiance is noble. There's a festival of dance over the weekend so almost certainly we'll go to that. I haven't mentioned what I'm reading lately, have I? My Goodreads page gives details of that and also contains an unpublished short story I posted yesterday.

I finally have a flat of my own. It's small but cosy and quite adequate to my needs. I now have to move all my stuff from the houses of other people into my new abode. Most of my stuff consists of books. Despite several major book culls in the past few years I still seem to be overrun with the things! 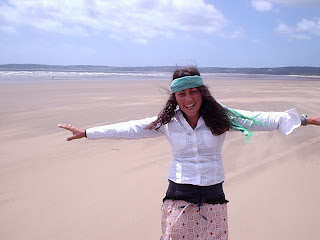 Two weeks ago I planned to hold an informal booklaunch for The Postmodern Mariner on Swansea Beach. The day after Midsummer's Day seemed an ideal time for such an occasion. But this is Wales: the winds were so strong that all the books would have blown away! Not that there were any books: I neglected to take them. Down on the beach itself conditions were akin to a cinematic sandstorm!

This photo shows Adele leaning into the wind while the wind supports her. The wind has never been so kind to me. I now choose to consider that first sandblasted booklaunch to be merely a (very) dry run for the real event, probably held at the end of this month in the same place, hopefully minus the same winds. With wine, fire and food it might actually turn out to be a pleasant occasion! 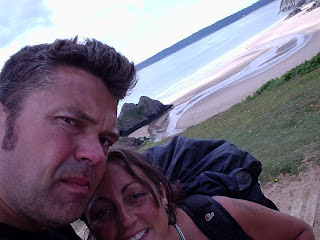 I first met Adele back on 11th October 2006. She is the finest human being in existence, the most lovely person created since our planet solidified from molten star-stuff billions of years ago. Destiny arranged for us to be together: I won't go into details. It has been a long journey for us, with lots of twists and turns, but we have arrived at last. I can no longer imagine living without her.

She is my moonbeam, my wine, my sun, stars, passion fruit, songs and all the good things of the universe. I believe we will be together forever. We have many plans for the future but at the moment simple survival is our priority: we don't have much money, though things aren't as bad as they were a few weeks ago. Our entertainment consists of avoiding expensive restaurants, pubs, cinemas, etc. We enjoy the outdoor life instead: walking, camping, swimming. Costs in this world might be high but coasts aren't.